Astride a Pink Horse, Dr. Greer, and a Mongoose =Giveaway

June 23, 2011
In anticipation of Dr. Robert Greer's new book, Astride a Pink Horse, I wante to share with you an interview that the Denver Post, a newspaper in Colorado did with Dr. Greer. Also. thanks to Caitlin, I have a copy of THE MONGOOSE DECEPTION to give away to one lucky reader. Open to US and Canada only. Ends June 30th. Thank you and enjoy.

Robert Greer is the author of the CJ Floyd mystery series, The Devil’s Hatband, The Devil’s Red Nickel, The Devil’s Backbone, Resurrecting Langston Blue, The Fourth Perspective, The Mongoose Deception, Blackbird, Farewell, and the prequel, First of State. In addition, he is the author of a collection of short stories, Isolation and Other Stories and two medical thrillers, Limited Time and Heat Shock, and the novel, SPOON, which among other honors won The Colorado Book Award in Literature in 2010. His short stories have appeared in numerous national literary magazines and two short story anthologies showcasing western fiction. He founded the High Plains Literary Review and reviews books for Denver National Public Radio affiliate, KUVO. Dr. Greer is also a professor of pathology and medicine at the University of Colorado School of Medicine and owns a working cattle ranch in Wyoming. His next book, a stand-alone thriller called Astride a Pink Horse, is due out in March 2010 from North Atlantic Books. His website is http://www.robertgreerbooks.com/ 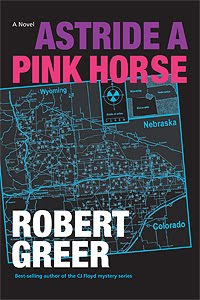 ASTRIDE A PINK HORSE is an exhilarating ride through a post-Cold War landscape of revenge, murder, and governmental conspiracy, by the author of the acclaimed CJ Floyd mystery series.

John Fitzgerald Kennedy, America's thirty-fifth president, was as dazzling a public figure and politician as America has ever seen. Today, forty-three years after his assassination, America and the world remain fascinated by JFK, his administration's short-lived Camelot, and the Kennedy myth. The mystery surrounding JFK's assassination has proven to be an endless source of both controversy and conversation for everyone from political and media pundits to the man and woman on the street, all with a bevy of conspiracy axes to grind. The Warren Commission, formed to investigate the Kennedy assassination, fingered Lee Harvey Oswald as the lone assassin, but conspiracy theories continue to abound.

When Cornelius McPherson, a sixty-three-year-old one time miner turned Colorado state highway maintenance man, who in 1968 worked on the original Interstate 70 Eisenhower tunnel bore that drove its way through a Colorado mountain and the US Continental Divide, ends up thirty-nine years later, trapped two days before his retirement, mid-Eisenhower tunnel in an earthquake, a vital key to the nuts and bolts of JFK's assassination descends on him from behind the tunnel's earthquake-damaged walls. That key takes the form of the frozen, well-preserved, still recognizable tattooed arm of one of McPherson's original mining comrades—a man who, more than three decades earlier, had confided to McPherson in a drunken stupor one night that he knew who had actually killed JFK.

McPherson turns up dead soon after the rest of the frozen remains of the tattooed murder victim are discovered and CJ Floyd, cheroot-smoking reluctant investigator and part-time bail bondsman turned antiques dealer, is drawn into a murder investigation when the frozen remains of the long-dead man are linked directly to CJ's friend and business associate Mario Santoni, an eighty-two year old curmudgeon and former Denver mafia don with a passion for antiques and rare collectibles.

The investigation takes CJ on a trip into the bowels of arguably the most intriguing assassination case in world history as he tries to find out how the popular 35th president was set up for the kill and who really killed him. It is a retrospective trek that has CJ investigating CIA plots, mafia dons, and Cuban conspirators. However, it is not until CJ realizes that there were in truth two attempts on Kennedy's life prior to his actual assassination on that fateful November day in 1963 in Dallas—one in Chicago and one in Tampa—that he's able to hone in on a trail leading to those who might have really killed the president. It is a journey that takes CJ from the pristine mountains of Colorado to the muggy swamps of Louisiana, and one that ultimately leads him to a grieving, long-silent Louisiana backwoods Creole mother who long ago lost her only son.

In unraveling America's most important twentieth-century political crime, CJ enlists the aid of his always-faithful cadre of street-smart former rodeo cowboys; his insightful former secretary, Julie Madrid, now a top-ranked legal shark; and his partner, Flora Jean Benson, a former U.S. Marines intelligence operative, to solve the most compelling murder case ever to capture the American imagination. CJ puts his own life on the line as he travels the potentially lethal trail that may lead to the identity of the killer, and to the one person living who actually knows the entire story about who killed JFK.
Dr. Robert Greer

Marjorie/cenya2 said…
Sounds like a good read and I would enjoy these books.
I always like a mystery.

BrittanyGale said…
Please count me in! :)

Unknown said…
These look good! I don't know how to enter the giveaway, but I'm going to follow what everyone else is doing and leave my email in a comment lol