A Scream of Angels 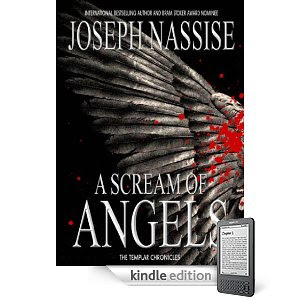 The second book in the Templar Chronicles, A Scream of Angels essentially begins where The Heretic left off, just a few months difference. Knight Commander Cade Williams has been spending a lot of time Beyond, searching for Gabrielle, his murdered wife. When found, he is in very bad shape and isn’t expected to live but, somehow, one of the team, Sgt. Sean Duncan, appears to have healed him. However Sean doesn’t think he did.

On the hunt for a new group of supernaturals, Cade and his team are forced to enter a place of pure evil – inhabited by an angel. What the Angel wants is beside the point, it’s what Echo Team delivers to him that is crucial. And the means of that deliverance couldn’t be more prophetic.

An exciting tale what will more than hold your interest while scaring you to pieces! The Templar Chronicles will reel you in and doesn’t let go until it’s all over. This could be a sensation on the screen and I hope it makes it there. Hollywood couldn’t write any better.
Joseph Nassise