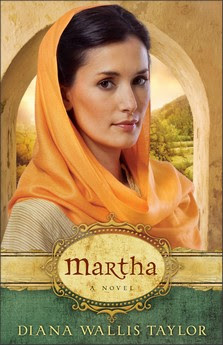 When Martha was just a young girl, her mother passed away. Since than, Martha has taken over the role as mother to her father, brother and little sister. Martha’s father has offered Martha to a nice young man as his wife. When the man takes another, Martha wonders if she will ever marry. As the years pass, Martha has settled with the idea that she will be an old maid. When love finally appears in front of Martha’s face, will she recognize it and accept it?

I have read many books that are based on women from the Bible, though it is not often that Jesus makes an appearance with his disciplines. Don’t be confused, just because this is a Christian novel, it is not preachy at all. In fact some readers might not like this book for that fact.

I could tell that Martha would be a great woman. She kept her father, brother and sister well looked after. She never questioned that she should be a young girl as long as she could. Martha was the glue that really held her family together after her mother passed away. While, Martha may have been the lead character in this story, the secondary characters were just as good. Author, Diana Wallis Taylor brought to life the story of Martha.