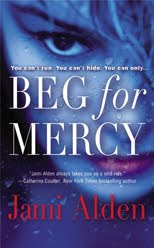 Megan Flynn and Detective Cole Williams used to be a couple. This is until Cole arrested her brother for murder. Now Megan’s brother, Sean is sitting in prison awaiting execution. Megan does not believe that Sean is a murderer, despite all the evidence pointing to him.

When a teen phones in a call of a dead body, Cole and Megan are once again reunited. When the murder victim’s wounds are similar to the ones of the woman that Sean was accused of murdering, Megan tries to convince Cole that he got the wrong man, three years ago. Cole does not believe Megan. Megan realizes that she will have to take matters into her own hands if she wants to prove her brother’s innocence.

Beg for Mercy is the first book I have read by this author. This book had the right amount of suspense and romance. Though be warned if you have a weak stomach and can not handle a lot of gore and blood. The killings are kind of heinous. It was funny that Megan was able to pick up on a simple clue between her brother’s case and the other murders and the authorities did not. Though, Megan and Cole were once lovers, they did not jump right back into things. I liked this as it made it more believable that Megan and Cole were the real deal. This story had me going down a couple different routes as far as suspects that I didn’t see the true identity coming until it was time. Beg for Mercy will have you begging for more, please! In fact, I can not wait to read the next book, Hide from Evil.

Courtesy of Hachette Book Group, I have three copies of this book to give away.
Only residents of the U.S. or Canada are eligible to win
-No P.O. Boxes, please.
Ends June 20th
Leave a email address


1. Beg for Mercy was originally going to be set in California. However, once I started doing research about California's death row and the appeals process I realized my heroine would be about sixty years old before the action in the book could take place! I quickly realized I had to change the setting to a state where things moved a bit faster. Hence, the book takes place in Seattle.

2. I'm pretty sure I'm the only parent in my son's preschool class who has called the Washington State Penitentiary to inquire about visitation rules for death row inmates.

3. When my boys, ages 3 and 5 first saw the cover they asked if I had written a book about Avatars.

4. At least fifty pages of this book were written in a remote cabin in Alaska in the middle of winter. How remote? It's 25 miles from the nearest town and you have to fly in a plane and/or ride a snow machine to get there.

5. I rarely get emotional over my own writing, but I teared up a little when I wrote the scene that reveals my villain's backstory.

gazon said…
Heck, yes. After reading some of the trivia, I want to win this book!!

Sheena Gossett said…
This sounds so very cool. Can't wait to read. Thanks

Tiffany Drew said…
Awesome! Please count me in, I'd love to read it. Thanks!

Unknown said…
I love the trivia at the end of your review. Sounds like my kind of book. Count me in for the chance at a copy!
danakburgess(at)gmail(dot)com.
June 18, 2011 at 12:31 AM

Na said…
Thanks for the review. Sounds like a very good romantic suspence.

Linda Kish said…
I would love to read this book.

winnie said…
Thanks for the giveaway! I'd love to be entered!