Get lucky with Lucky O'Toole 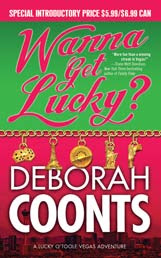 When a woman takes a nose dive from a helicopter into the middle of the pirate show at Treasure Island, this can only spell bad news for Lucky O’Toole. Lucky is the head of Customer Relations at the grand Babylon in Las Vegas. This is because the helicopter that the woman came out of belonged to the Babylon. Now Lucky must solve a murder before her luck runs out.

Author Deborah Coonts is a new voice in the mystery genre. She introduces readers to Lucky O’Toole. Lucky is one tough cookie. She is the right woman for the job. When, she calls the shots, you better watch out. Unfortunately, if it was not for Lucky, this book was middle of the road for me…alright. The rest of the characters kind of took a back side to Lucky in making an impression on me. Don’t expect the characters to be serious. This book was on the cozy mystery aspect of the spectrum but with kooky characters and story line. Reading this book did make me think of a Vegas show in a good way. While, I did think that there were some improvements that could be made with the book like stronger characters and story line, I would give the next book a shot and see if I scored big. 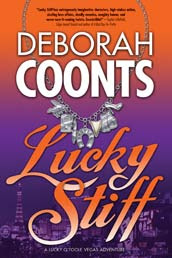 Lucky O’Toole is back. Who knew that all it took was a truck load of honeybees to shut down Vegas. A truck driver lost control of his truck and yep you guessed it…tons of honey bees come flying out. Remember this is Vegas, so when the police receive the phone call about the accident, they do not bat an eye lash and dispatch someone to come clean up the mess. Because this is Vegas, it isn’t complete without a good murder. When Mrs. Neidermeyer is found as shark food, Lucky is on the case.

Lucky Stiff was like Wanna Get Lucky. While Lucky has grown on me, I just could not really take this book as a serious mystery novel. It might have to do with the way the characters some off as some times cheesy. Also, all the references to Vegas were not necessary. Because Lucky is such a strong, independent woman, it was hard to see her falling for a nice, sweet guy, who all she wanted was to spend time in his arms. Sorry to say that I could not finish this book as much as I tried. Though, if you are looking for crazy characters with your mystery than you might like Lucky O’Toole and this series.
Deborah Coonts