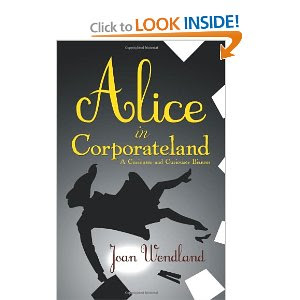 Alice is all grown up. Only, she did not end up with a happy ending. No, she was married but that ended. Alice has to go out into the corporate world and get a j-o-b. Yes, Alice is no longer in wonderland. Alice awakes to the white rabbit exclaiming that Alice was late for her interview. That is ok, says the rabbit as he knows a short cut. Alice follows and ends up in a world full of responsibilities, co-workers, and a boss. Oh, poor Alice.

This book was like stepping back into wonderland but only this wonderland was scarier. All the things that Alice had to encounter like…sexual harassment, down grading, and an evil boss. Alice in Corporateland incorporates some of the experiences that author, Joan Wendland encounters herself in the corporate world. I got a whole new look at the characters of this beloved story. The white rabbit was quite the pervert. I did not blame Alice for wanting out. This book gives a funny look into the world of employment.
Joan Wendland