The Gift of Illusion 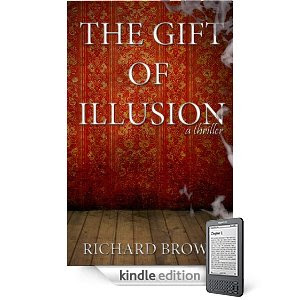 Once up on a time, there was an odd man who was an Illusionist. Not a Magician, that’s a whole other thing. An Illusionist does more than slight of hand, he is the slight of hand. Lucius tortured people in his basement to see how they died and then he burned the bodies. It appears that Lucius may have returned.

Isaac Walker lost his wife sixteen years ago and has raised his daughter alone. Done a good job, too. But now, someone is trying to kill Isaac and Amy and many others as well. It all began when Lori Ackerman burns to death in here room. Followed by her mother in a motel room and her father in a truck.

Obviously, something has gone wrong and Isaac knows it’s up to him to sort it all out and make it go away. That’s where things get a bit more odd, whatever is torching people wants Isaac – alive. The why would be a spoiler and we certainly won’t do that but I do recommend your picking up this short story and keeping the lights on while you read it.
Richard Brown