Virgin is the cat’s meow! 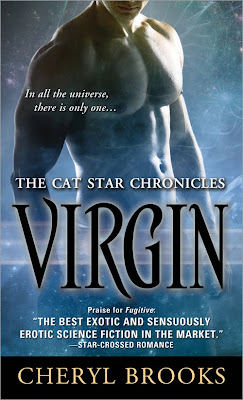 Dax is probably one of the last Zetithian males to not have a mate. This is only because Dax has his eyes on Ava. Funny though as Ava does not seem to be interested in Dax. Zetithian males have the ability to make any woman fall for them that is except for Ava.

When Ava hitches a ride on Dax’s ship, Dax may finally have his opportunity to win Ava over. Unfortunately for Dax, Ava is heading back to an old boyfriend. Dax has until they land to try and convince Ava that he is the man for her.

Virgin is the latest book in Cheryl Brook’s the Cat Star Chronicles series. I just love every one of these books. I just devour them. Virgin is the cat’s meow! It is purrrfect. It was refreshing to find a woman who did not instantly succumb to the Zetithian male’s charms and aroma. Dax was a surprise. To find a Zetithian male that was more a virgin than the woman he was pursuing. This actually helped as I could picture Dax and Ava making a good couple together. Another surprise was Kot. Kot is a robot that is on Dax’s ship. Kot has a mind of its own. The outfits that Kot would choose for Ava was funny. It was like Kot was helping Ava and Dax get together. I can not wait to pounce on the next book in this series.
Cheryl Brooks