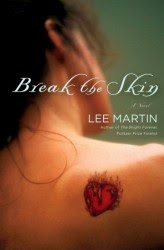 Laney is barely an adult, when she leaves her home and moves in with thirty five years old, Delilah. Delilah and Laney work together as the grocery store. Soon, Delilah and Laney become friends. It is not long after that; the women have a third room mate join them. Her name is Rose. Things seem to be going alright until that one fatal night.

Miss Baby runs a tattoo shop. She has been burned by more men, than she would care to like. When a stranger appears, Miss Baby welcomes the man into her world. But who is he and where did he come from? These are questions that Miss Baby chooses to ignore.

Mr. Lee Martin is a new to me author. I thought that is was a good book. Though, I must admit that there was something about Miss. Baby that I liked more than Laney. With Miss. Baby, I got a woman, who had lived and had a lot of life experiences. Plus, she was more inviting to get to know. While, Laney was less experienced but an alright story teller. This book reminded me of watching a soap opera. There was so much drama, murder, mayhem, intrigue, and romance in soap opera fashion. For me, the book started out alright, the middle was good but the ending was the better part of the book. I thought the ending tied up the two stories nicely.
Lee Martin

Marce said…
I like the cover, it sounds like a great story possibly better execution needed.
June 11, 2011 at 8:12 PM

Cheryl said…
Marce- Yeah the cover is nice. The story was not bad but if the characters had connected with me more, than I would have liked it better
June 12, 2011 at 1:23 PM