WAREHOUSE 13: A Touch of Fever 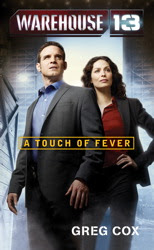 Secret Service Agents, Pete Lattimer and Myka Bering have just come back from retrieving Anne Bonny’s cutlass. There was almost more of Pete than he would have liked. But he and Myka survived.

I have not watched Warehouse 13, though I have seen previews and wanted to check it out. After reading this book, I now more than ever really want to check this series out and plan to watch. I could tell that Mr. Cox really was excited to want to write a novel based on this series. This book read like the series than just a book based on the series. I started this book on my lunch and was already half way over before I realized that it was time to go back to work. Pete and Myka work well together. I would have to say though that I think Pete is more of the muscle and Myka is the brains. Not to take anything away from Pete as I liked him as well. Artie was fun. When he would get really excited about something and start talking in his own “Artie” language that was funny. Warehouse 13: A Touch of Fever is worth both your time and money!
Greg Cox