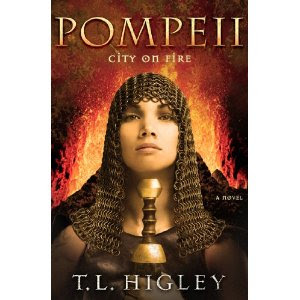 Ariella has been a slave of Valerius for nine years. When Ariella spots an opportunity to escape, she takes it. Now, she must find a way to stay hidden within the city. Ariella come sup with the idea to become a gladiator. It is highly unlikely that Valerius will ever think to look for Ariella within the gladiator area.

Cato was being encouraged to run in the political election against the evil, Maius. Cato wanted no part in politics. Cato would rather perfect his craft as a wine maker. Though, when Maius makes things person involving Cato’s sister, Cato has no choice but to get revenge on Maius.

Pompelli: City on Fire is the latest book in T.L. Higley’s Seven Wonders of the World series. I have read almost every book in this series. Each book focus on a different biblical wonder. This book features the city of Pompelli and the volcano, Vesuvius that destroyed the city. I really liked Ariella’s story. She was a strong character. It was nice to get to see her grow from a young girl into an independent woman. She reminded me of Joan of Arc. Cato was also nice and kind hearted. Though, he was more on the quieter side and did not make as much as an impression on me as Ariella did. Pompelli may not have been on fire for me but it did sizzle.