For anyone who is a foodie or just loves to cook 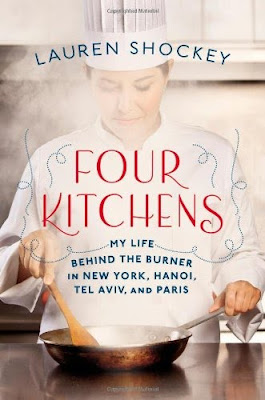 I applaud Lauren for knowing what she wanted and finding a way to pursue her dreams of wanting to be a chef. After Lauren’s disaster in France, some people would have thrown in the towel and been done but Lauren decided to try again only this time at three different locations. Lauren would apprenticeship. The first being in her home town of New York, than Tel Aviv, Israel and finally to Paris, France.

Lauren’s first stop…wd-50. Wylie Dufresne’s place. Anyone who is a foodie, works in the culinary world or is a fan of Top Chef is familiar with Wylie. Wylie is into molecular gastronomy. This technique is the movement to incorporate science and new techniques in the preparation and presentation of food. While, I didlikegetting the behind the scenes look into the restaurant world and Wylie’s place, I did wish that I could have learned some more about some of the different techniques Wylie was doing. The recipes though that came from his restaurant that appeared in this book sounded yummy.

In Tel Aviv, the people were really friendly and the restaurant that Lauren worked at had a more laid back approach. Paris, those people say it like it is and as Lauren learned sometimes you just have to take it like a man. Of course, I would imagine the chefs have to be serious as the food that they produce is great.

For anyone who is a foodie or just loves to cook and try new things, than you should check this book out. It will give you a nice brief look into the culinary world and as an added bonus you can try out some of the yummy recipes from each location that Lauren visited that are included in this book.
Lauren Shockey