All These Things I've Done 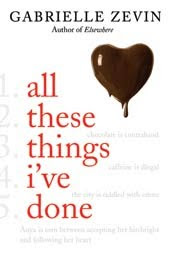 Anya Balanchine is sixteen. She lives with her nana, mentally challenged older brother, Leo and her younger sister.

The year is 2083. A time where the country is in poverty, being run over with crime and almost every thing is considered contraband. This includes caffeine and chocolate!

Anya has recently broken up with her boyfriend, Gabe. Anya is not heart broken but she is mad for the fact that Gabe told everyone first. When Gabe does not show up to school, Anya does not think much about it, until her presence is requested in the principal’s office. Gabe has been poisoned. Gabe ate some bad chocolate. Chocolate that Anya gave him. Can Anya prove her innocence?

I did not really know what to expect from this book when I first sat down to start reading it. After finishing this book, I have to say that it was better than I had hoped. While, this story takes place in the future, it is not really on the sci-fi spectrum of the genre. In fact, I did not really see any great advantages to living in the year 2083. Every thing is banned, there are curfews for children and teens as there is much crime…no, thank you. If eating chocolate is a crime, than I am a criminal.

I liked Anya. She seemed older and wiser than her sixteen years. She is because she had to be the rock and glue that held her family together. Besides Anya, I liked Leo as well. Other than these two, the rest of the characters did not have much going for them. There was some sparkle that was missing in this book. I would have liked to see Anya show what being a crime boss daughter is like as in if you mess with her and her family; you better watch your back. I saw a little but not a lot. It seemed like when it came to these types of things, they were muted down. Don’t know if this was partly because this is supposed to be a teen book. Ms. Zevin did do a nice job on this book.

Rachel said…
I just read this and really enjoyed it. I totally agree with what you said but I learned this is going to be a series, so I think we'll see more of the tough mob daughter Anya come out eventually.

Maybe she felt that Anya needed to be sympathetic and a lovable character before unleashing Anya's inner Soprano?

Cheryl said…
Rachel- Yeah I saw this will be a series and do hope that Anya will get tougher in the next book
September 23, 2011 at 8:58 PM