Megan's Secrets...I read this in one sitting amid tears, laughter and pain. 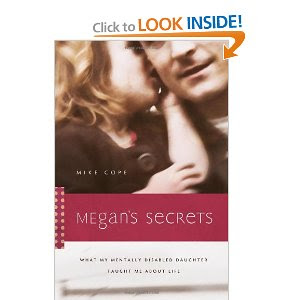 Mike Cope’s daughter, Megan lived to the age of 10. She was mentally disabled but taught all who met her many lessons of faith. Mike and his family loved her dearly and were devastated when she passed. But her passing only confirmed their faith in each other and in God.

Megan’s Secrets is a testimony to that faith and who Megan effected those around her. Family friends, doctors, caregivers and more all learned from her things such as patience, forgiving, friendship and a deep abiding faith that whatever God had in mind for Megan and themselves it would work out as planned.

I read this in one sitting amid tears, laughter and pain. Megan was one of the people many would have ignored, walked away from and never learned what joy was inside. Their loss. Obviously Mike Cope has spent many years pondering Megan’s gifts to others and has given us a great gift in this book. When I was a little girl in Sunday School, my favorite song was “I’m in the Lord’s Army”. It was Megan’s as well and I will never think of that song again the same way. Thanks, Mike.

About the Author: Mike Cope is an author, blogger, professor, minister and magazine editor. He has written four books, including What Would Jesus Do Today? and One Holy Hunger. He was a minister for many years at the Highland Church in Abilene and now works with Heartbeat Ministries. He and his wife, Diane, live in Abilene, Texas, and have two surviving children: Matt, a resident in internal medicine at Duke University, and Chris, a junior in high school.
Mike Cope

Jasmine Warren said…
Actuit India provides a wide range of accounting and financial outsourcing solutions to small businesses. Our Accounting Services help our customers in reducing cost, increasing the productivity and operational efficiency of their accounting processes. At Actuit India we integrate our team of accounting professionals to work directly with small businesses in offering highly reliable and accurate solutions.
September 8, 2011 at 4:52 AM

Marce said…
Great review, sounds touching, I love to go through different emotions while reading.
September 8, 2011 at 8:44 AM