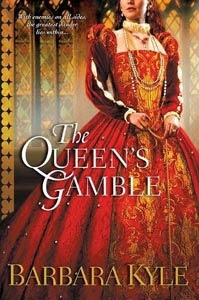 In this book, Elizabeth is now Queen after her half sister, Mary’s fall from reign. Elizabeth has a lot of prove. Most of the people are just waiting for Elizabeth’s fall as well. This is probably why France has decided now is the best time for the country to make a move and try to over take England.

Isabel, her husband Carlos and their son, Nicholas have arrived from Peru to England. Things have changed quickly as Isabel soon discovers after coming back home. Isabel was sheltered from the dealings of an upcoming war living in Peru. Since arriving in England, Isabel becomes friends with Queen Elizabeth. In addition to getting close with Queen Elizabeth, Isabel shares her view on the war and that France must be stopped. This causes a huge rift between Isabel and her husband, Carlos when he is dispatched to help the French.

The Queen’s Gamble is the fourth book in the Thornleigh series. This series feature round the Tudor era. This book can be read as a stand alone novel. While, I have read many favorable reviews about this book, I can not fully jump on the band wagon as everyone else. On one hand I rally wanted to like this book more than I did ad I enjoy reading this era and can not wait to get my hands on a book that focus on this time period bit for some reason I could not fully embrace this book. It took me a little while to really get into the story. Not for a lack of the story line or the characters as I did like Isabel and Carlos. They made a good couple and I liked Isabel’s fierceness. It seemed that the author stuck close to historical facts with this book. I did appreciate this. Fans of the Tudor era should check this book and series out as it is worth your time.

Cheryl said…
Thanks for taking the time to review Barbara's latest installment of her Thornleigh series. I hope your readers will check it out.
September 16, 2011 at 6:34 AM

Barbara Kyle said…
Thanks for highlighting 'The Queen's Gamble'. I appreciate the chance to reach out to your readers.
September 16, 2011 at 10:27 AM