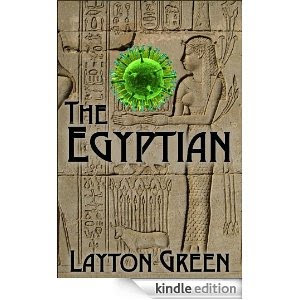 Who wouldn’t like to stop aging; even possibly regress a bit? Of course you would! And so would the men in Layton’s Green’s newest novel The Egyptian. It’s the lengths these men are willing to go to that separates you from them.

Dominic Grey is working for a man named Viktor who is in charge of religious phenomenology and is getting a crash course in all this “odd.” Odd being a silver tube which was stolen from its maker and given into the hands of someone who shouldn’t have it – ever.

Dominic has more than silver tubes on his plate. He has Veronica who is interested in everything. Who does he work for? What is he investigating? Why isn’t he flirting back? And the questions continue.

This is not a humorous story. I doubt anyone in even cracks a smile. The characters are well thought out and the places Dom visits are well described. Apparently it is the second phase of Dominic Grey stories and I will go back and read The Summoner to see where I missed certain issues. I didn’t know this was a sequel and you certainly don’t have to read the other first. Not exactly my cup of tea but I’m sure it will be yours!