My Soul to Take does have some bite to it. 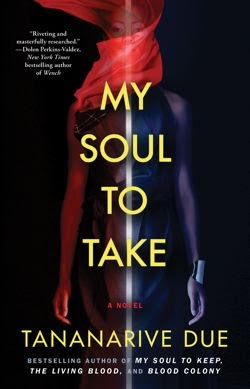 Carlos Harris has just traveled to Puerto Rico after hearing the news that his mother is dead. When Carlos arrives, he learns that his mother did not just death of nature cause but of something much worse. Bad enough that the government is trying to keep it under wraps. The only thing Carlos knows is that the virus is air borne in nature.

Phoenix Harris is a famous singer and wife to Carlos. Phoenix is approached by a man named John Wright. John’s employer wants Phoenix join them on stopping the spread of infection. Currently, all John’s employer wants Phoenix to do is agree to a benefit concert. Phoenix is reluctant at first but than Phoenix agrees to the concert. After Carlos and Phoenix meet Fana, they know there is no turning back. Fana is to be engaged to Michel. Michel is ruthless and is the polar opposite of Fana. Instead of wanting to cure people, he would rather kill them. Is Fana and her band of Life Brothers strong enough to defeat Michel?

My Soul to Take is book four in the African Immortal series. While, I have not read any of the prior books one through three in this series, I had no problem getting into the story and quickly catching up to speed to what was happening in the series. My down fall to not having read any of the prior novels and of course this could just be me but I felt like if I had started at the beginning, maybe I would have been more connected to the characters. Aside from this fact, I did like the story. The beginning started out at a good pace, than it got slow at times and towards the end it picked up again. I liked the idea that Fana recruited Phoenix to help heal people through the power of Phoenix’s music. As they say, words can be very powerful. I will check out more of Mrs. Due’s in the future. My Soul to Take does have some bite to it.