Bones Beneath Our Feet 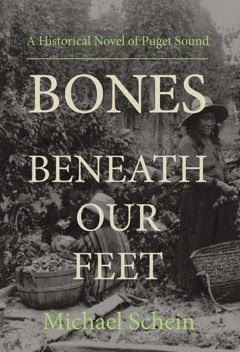 In a moving story of the unnecessary war between the Nisqually Indians led by their chief, Leschi; and the whites led by governor Isaac Stevens. When Stevens was but a soldier he was unable to meet his own demands of himself and, after gaining the governorship he only had the opportunity to miss larger goals. He did this well.

Leschi, on the other hand, was a leader of his people, helping out where he could but Stevens kept pushing and, well…..there you have it. Leschi took change better than most Indian Chiefs but it took him in the end.

If you live in the Puget Sound area this is a must read. You need to know your history because, as they way: “If you don’t learn your past you will repeat it.” I don’t mean there would be an uprising at all – just the opposite. But before you take off traveling your land, you need to be aware of what happened there and that IT WAS OUR FAULT.

The characters and scenery are so well written that I just wanted to go back to the forests, the rivers and see the hills as they were then and as Schein wrote them. Real people make up this story and we can easily relate to them. Which of them you relate to is up to you.