This book would be approved by the voters! 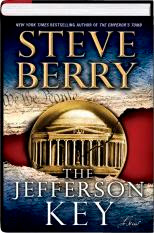 Cotton Malone finds himself in the deadly cross hairs of a political game of cat and mouse, where the stakes are high. When Cotton receives an invitation to meet his old boss, Stephanie Nelle, Cotton accepts. Cotton enters the hotel room where he is to meet Stephanie but she is not there. When Cotton realizes that he has walked into a trap it is too late. Cotton is than captured and charged temporary for the attempted assassination of President Danny Daniels. Once President Daniels learns that Cotton is involved, he turns to him for help to stop the real people behind the attack before it is too late.

The Jefferson Key is book seven of the Cotton Malone books. I have not read many books from Mr. Berry. I have to admit that I could not stop reading this book. I like the mixture of history with mystery that was in this story. Cotton is the man. He is like Nicolas Cage in the National Treasure movies but way cooler. Sorry Mr. Cage.

The reason I mention National Treasure is because the story incorporated present with past. It was fun reading Andrew Jackson’s letters and trying to decipher the hidden meanings behind them. There was lots of action that had me running from place to place. It was almost like I needed running shoes. The Jefferson Key is worth your time and money. This book would be approved by the voters!
Steve Berry