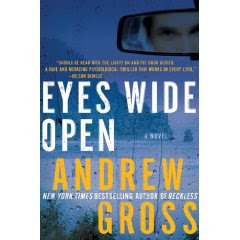 Dr. Jay Erlich and his older brother, Charlie are estranged. Though this does not change the fact that Jay would do anything for his brother. Especially when Charlie’s wife, Gabby calls to inform Jay that their son, Evan is dead. Jay drives down to be with his brother. It seems that Evan was a disturbed young man. He had stopped taking his medications. His parents had him admitted to a facility. Only, Evan was released four days later. Gabby and Charlie did not know that Evan had been released until they saw the story of Evan’s death. Jay thought that Evan’s death was just a sad event but he soon realizes that there may be more than meets the eye.

Every time that I pick up an Andrew Gross novel, I know that I am going to be in for a ride. Eyes Wide Open This story was based around true events. I can not imagine learning that your child has dead from the news. This book had a bit of a different feel to it than Mr. Gross’s past novels. While, it still had the suspense and adrenaline rush that I get from reading his books, I could tell that the characters were more real. This is probably because it was based on true events. There was never a dull moment in this book. Charlie was an interesting character. I liked getting to know about his past and how he got to be the way he was now. This made him three dimensional. My eyes were wide open the whole time reading this book.
Andrew Gross