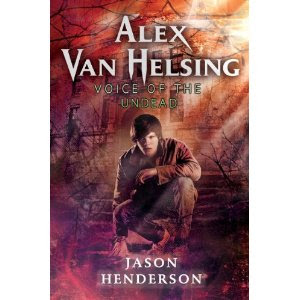 Alex has just finished a training session with Sangster, his mentor with the Polidorium, a multinational organization. Just because Alex is part of the Polidorium does not mean that he is exempt from curfew at Glenarvon Academy, where he attends. On his way back to Glenarvon Academy, Alex is attacked by Elle. Elle is a vampire and Alex’s nemesis. Elle works for Scholomance. The Scholomance want Alex dead for good. After almost succeeding, Alex is forced to stay at LaLaurie School for Girls, Glenarvon Academy’s sister school. Will Elle finally take down Alex once and for all?

Alex Van Helsing: Voice of the Undead is book two in author, Jason Henderson’s young adult series featuring Alex Van Helsing. Book one is Alex Van Helsing: Vampire Rising. I would strongly suggest starting with book one as there is no lead up into book two. Though, it is pretty easy to quickly figure out who the bad guys are, there is not a lot of back ground story as to why the Scholomance want Alex dead.

This series is geared towards readers twelve and up. I think twelve is the perfect starting age for this series. There is some violence and the story is written for a more mature young reader. Young boys would enjoy this series. Alex is someone that young readers can get attached to and cheer for as he battles vampires.