Mr. Lavender’s newest book, Dominance is out of this world rockin! 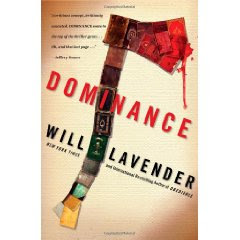 Jasper College is about to embark on a new course. It is titled “Unraveling a Literary Mystery” The class will be talk via television by convicted murderer, Dr. Richard Aldiss. Dr. Aldiss’s inspiration was recluse author, Paul Fallows. Followers of Fallows’s work would play a game called “The Procedure”. You were special if you were invited to play. The rules of the game are simple…Try and uncover the true identity of Mr. Fallows through his work. If you do than you are in the top elite few that have solved this great mystery but if you don’t than you should hope for death.

Alex Shipley was one of Dr. Aldiss’s students. Now, it seems that someone is still playing the game only the person is playing for keeps. Two people have already been killed, who attended Dr. Aldiss’s class. It is up to Alex to find out who among the remaining former students is the killer.

I can remember reading Mr. Lavender’s debut novel, Obedience and saying, “Ok, this is an author to keep me eyes on”. I was right. Mr. Lavender’s newest book, Dominance is out of this world rockin! This book reminded me of the classic, board game Clue. Which I loved by the way…Mr. Plum in the library with a candle stick. From the first page until the last page, I was hooked. The past story line just help to add to the present. If it was not for Alex, Dr. Aldiss and a great story line, this would have fallen flat. Most of the other characters, while secondary were flat and boring. The ending was one of the best. I yelled when I read the ending. Mr. Lavender can not leave me hanging like this. There are a few “ghost writer” authors that I have read that I have tried to uncover their identity but I have never tried to discover who they were from their books like the students did for Paul Fallows. I just may have to start my own Procedure game.
Will Lavender