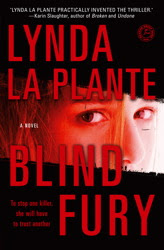 Detective Anna Travis has a serial killer on her hands. Someone is targeting prostitutes and killing them. The latest victim was found naked and by a truck stop. Anna and the rest of her unit have tried everything to identify the woman but she is a Jane Doe. With the trail growing cold, Anna’s boss is feeling the pressure to crack the case and soon. So when opportunity presents itself to Anna in the form of an offer from inmate, Cameron Welsh offering to help Anna track the killer, she can not pass up the invitation.

I had high hopes for this book and it did have glimmer of brilliance but it was far and between for me. I found Anna frustrating. I kept yelling at her to wake up and grow some, you know what. For instance, when she was interviewing a gal that she knew was lying, she just took the woman’s word and left. Later when she and another detective were talking, she said that she bet that the gal threw away the suitcase after I left. If Anna believed that the woman had the suitcase, than why did she not sit in her car and wait for the woman to toss it and than go through it? Another instance: Anna went back to the woman later and once again questioned her, the gal shock an article of the victim’s clothing in her face and Anna did not ask to look at it. She just apologized and left. In addition, there was a lot of dissecting about why the killer would target prostitutes but not a lot of action going on. Sadly, this book was just middle of the road for me.
Lynda La Plante