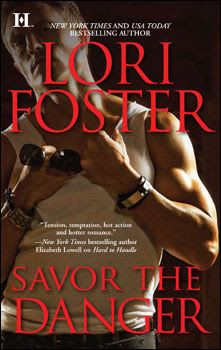 Alani has been in love with Jackson for a long time. This is why when Jackson awakes beside her in bed the next morning and can not remember that they just had hot, steamy sex, Alani is heart broken and mad. Fortunately for Jackson, he had a good reason for not remembering. Someone has erased Jackson’s memory. Dare, Trace, Alani and Jackson are on the case.

Savor the Danger is the third book in The Men Who Walk the Edge of Honor series. Though author, Lori Foster says you can read these books as stand alone novels, which you can, you will probably want to read all these books starting with When You Dare. All the men in this series are sexy and yummy.

Alani and Jackson are smoking hot together. You could tell that they had sexual chemistry. They could not keep their hands off each other. Some times I think that this can get to be a little over board but in this story it worked. It was funny though that Trace, Alani’s brother and Dare were so protective of Alani. It was more about the way that Trace and Dare acted. Like they were some big, tough guys and they were fighting for Alani’s honor. Alani did not need protecting and besides Jackson could take both Dare and Trace. Dare and Trace were more for show than anything as they would not like to admit it but they were happy for Alani and Jackson. While, I did like this book, I did find at times that it did move slowly as Dare, Trace, Alani and Jackson tried to track down the culprit behind Jackson’s memory loss.
Lori Foster