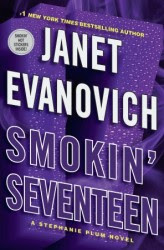 Stephanie Plum arrives at her cousin Vinnie’s temporary new job site, only to find her boyfriend, Joe Morelli there. Joe is not here to see Stephanie. There is a dead body. Stephanie and her friend Lula are on the case.

Murder stands in no way of Stephanie’s family’s quest to find Stephanie a good man, even if that means someone other than her boyfriend, Joe or her lover, Ranger.

There were some funny moments to be found in this book that I would find myself stopping for a moment to read my husband a line in the book. For example there was the moment when Lula accidentally shot off a possible suspect’s toe. I must admit that I have not followed this series that closely. I have only read a couple of books. Though, this might have been an advantage or disadvantage. Whichever way you look at it. I say this because this book seems to have a lot of mixed reviews. A lot bad and a lot good. While, I am sure I might feel the way some of the readers did with the three star or less reviews, if I had followed this series but since I had not, I did not see a problem with this book and enjoyed it. This book was on the lighter side of the mystery/suspense spectrum. There was not a lot of blood and gore. If I had to choose between Joe and Ranger, I would have to go with Joeger. This is a combination of Joe and Ranger. Joe is sweet and loves Stephanie but on the other hand Ranger is the bad boy, who you can guarantee you will not get bored with. Stephanie is too independent to be tied down to just the one guy and needs both guys to equally even her out. Now, that I have read this book, I do plan to go back and check out the other books that I have missed.
Janet Evanovich