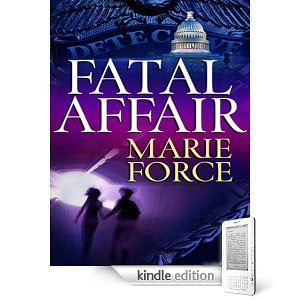 Washington DC Police Detective Sergeant Sam Holland slid down the ladder some on her last case. Since then she has been trying to get back up again.

Senator John O’Connor has been murdered. This is just the break Sam needs to get back in everyone’s good graces.

Nick Cappuano is the Chief of Staff for Senator O’Connor. O’Connor was also Nick’s friend. Nick doesn’t care who is investigating the murder of the Senator; he plans to make sure he helps with the investigation. Nick may have a change of mind when he learns who is in charge of the murder investigation. Sam and Nick shared a hot, passionate night together a long time ago. Sam and Nick head down a path filled with deceit and greed. There is no turning back.

Fatal Affair is the latest release from Marie Force. I have read several novels by this author and really enjoyed them. Fatal Affair is a bit of a change from Mrs. Force’s other novels. This one is a suspense/thriller while the others are more romantic comedy.

The chemistry between Nick and Sam was there. They worked well as a team. I like that Sam portrayed a strong female in a male dominated world. As much as I liked this book, aside from Sam and Nick, I didn’t really feel any connection with the rest of the characters. This was a bummer as then I was not fully committed to the story line. Overall, through this is a quick read. Fatal Affair will have you committing your own affair with this book.
Marie Force

Becky W. said…
Good thoughts! I've started this book, but not very far yet. Hopefully I'll finish this week. I've liked her past books, so I'm hoping this one doesn't disappoint!
June 14, 2010 at 12:57 PM