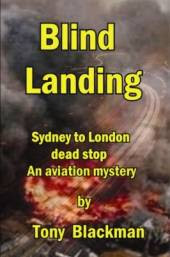 Blind Landing is the latest aviation mystery Story by Tony Blackman featuring Peter Talbert insurance Investigator Blind Landing is chronologically the first book in Tony Blackman's aviation mystery series featuring Peter Talbert, insurance investigator. The world's largest and newest airliner flying non-stop from Sydney to London is hijacked by some Al-Qaeda terrorists and crashes in freezing fog landing at Heathrow. The accident investigators started to blame the pilots and it took two trips to Australia and a very attractive girl for Talbert to discover finally what really happened and then explain at the Public Inquiry.

Southampton, UK - June 14, 2010 - Tony Blackman has written another amazing story, this time of the world's largest airliner flying non-stop from Sydney carrying 530 passengers and crashing in freezing fog a few hundred yards short of runway 27L at Heathrow with only 145 survivors. The aircraft had been hijacked over eastern Europe and the hijackers were demanding that six Al-Qaeda prisoners be released and brought to the aircraft.


The aircraft had been using the latest European satellite system, Galileo, to make the approach and the cause of the accident was not immediately obvious. The crew and the hijackers were all killed and the quality of the speech on the crash recorders was very poor. A newspaper leaked the information that apparently the pilots had been out on a party the night before the flight and that the accident investigators suspected that the pilots had made a mistake. The Government decided to ordered a Public Inquiry to try to establish how the hijackers got on board the aircraft, how the information was being leaked to the press and to find the cause of the accident.


The insurance company covering the airline in the event of pilot error asked Talbert to try to protect their interests as the accident investigation proceeded. He went out to Australia and met Liz, a very attractive girl who was at the party. In a heat wave lying on the sand in the middle of the night on a Sydney beach she told him what happened the night before the flight and Peter decided to return to the UK via Seattle to get the latest information on the electronic installation of the airliner. His lawyer girl friend Mandy was definitely not delighted when he had to return to Sydney to persuade Liz to come to England to give evidence at the Inquiry and was very suspicious on their return.


Only when the Inquiry re-started did Peter suspect what must have happened and he emailed Australia for confirmation. He returned home to find his house had been broken into and the papers he needed for the Inquiry stolen. The next day, just before he was called as a witness, there was a reply from Australia and as he was questioned by his counsel he was finally able to explain why the accident occurred.

The story that is told is entirely credible and not a 'flight of fancy'. The technical details are right up to date and at the end of the book there is an analysis 'Could it ever happen?' where the safety issues are discussed and changes suggested that might be required in the future. This book is a must read for people who love a mystery.

Tony Blackman spent his first working life in the Aerospace Industry, first as Chief Test Pilot of A.V.Roe, later British Aerospace, testing all the UK V Bombers and then the Avro 748 civil airliner which he demonstrated extensively all over the world. When he stopped flying he joined the Aerospace Board of Smiths Industries as Technical Operations Director developing the then new digital electronic displays and flight management systems. He was asked to join the Board of the UK Civil Aviation Authority as Technical Director where he served for five years.


As a result of his intimate knowledge of modern digital systems and regulations he has been able to write authentic action packed aviation mysteries featuring, in all five books, a very human aviation expert Peter Talbert who represents either an airline or an insurance company.

Tony has an honours degree in Physics and is a Fellow of the American Society of Experimental Test Pilots, of the Royal Aeronautical Society and of the Royal Institute of Navigation.

Harvee said…
Glad to find a new mystery writer, and I do like mystery series. Here are a few mysteries I found this week: My Friday Finds
June 18, 2010 at 5:08 AM