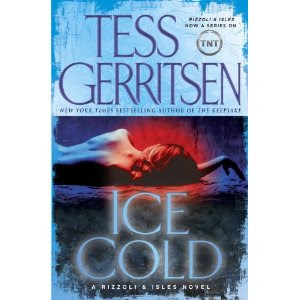 Maura has left to attend a medical convention. While there, she meets up with an old college classmate. His name is Doug. He is here with his thirteen year old daughter, Grace, and his friend Arlo and Arlo’s girlfriend, Elaine. Doug invites Maura to join them. After the convention, they are heading up to a ski resort. Maura takes Doug up on his offer.

The group heads out but they get lost and the vehicle gets stuck in snow. The group gets lucky and finds shelter in a small town called Kingdom Come. There is something wrong with Kingdom Come. How come all the houses are identical and where are all the people?

Jane receives a phone call that will change her life forever. The Wyoming police have identified the charred body of Maura. Jane can’t believe Mura is gone. Jane investigates to discover the truth about what happened to Maura and uncovers a sinister plot.

The queen of medical thrillers…Tess Gerritsen is back and in better form then ever with her latest novel, Ice Cold. I was spellbound but this book. You would have had to rip it from my cold, dead hands as I literally had a hard time putting it down. I finished it in one day. My only issue was that I found the story line involving Maura to be much more interesting then Jane trying to figure out what had happened to Maura. The intensity would fizzle a bit when the story line would switch back to Jane. Though, it was great to see Jane in action again. She is as tough as before. Ice Cold left me scorching, hot for more!
Tess Gerritsen

I have an award for you.

Becky W. said…
Great review! Thanks! I just read my first Gerritsen book a couple weeks ago, (Girl Missing) which from what I understand isn't one of her best. Yet, I loved it and can't wait to read more of her. I'll add this one to the list!
June 4, 2010 at 4:40 PM