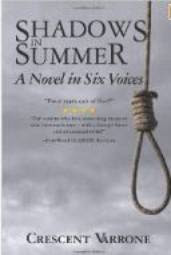 Haunting tale set in historic Copenhagen based on true story


From psychological to supernatural, first-time author Crescent Varrone uses six narrators to describe ghostly events from different points of view in Shadows in Summer: A Novel in Six Voices

AARHUS, Denmark - June 17, 2010 - Do you believe in ghosts? That is the question left to the readers of Shadows in Summer by first-time novelist Crescent Varrone. The story is set in Copenhagen, the centuries-old capital of Denmark. Katrina Nielsen is returning home in an attempt to bring her family back together after suffering the loss of her father seven years ago. What Katrina doesn't tell her mother is that she has been plagued by recurring nightmares of her dead father.

When Katrina and her husband Richard move into their new home named Sound House that overlooks the water, a series of inexplicable events begins. The smell of smoke, the sound of footsteps and a ghostly face at the window: Was their house haunted? Was Katrina's depression taking a turn for the worse? Or was someone purposefully trying to manipulate them? When Katrina is "pushed" down the stairs, the couple turns to others for help.

The book is narrated by six people including Katrina, Richard, both of their mothers, their neighbor Søren, and a psychiatrist named Edvard. Over the course of the book, each narrator reveals his or her own ideas on what is really happening.

"Reality is too complex to be boiled down to one narrative so I allowed each of the main characters to narrate the story from their point of view," Varrone said. "This allows the reader the opportunity to

review these unexplained events from different perspectives and come up with their own answers.
Whether one believes in ghosts or not doesn't matter-what happens to Katrina and Richard is terrifying."

ForeWord Clarion Reviews gives Shadows in Summer four out of five stars and says, "For readers who love something meaty to sink their teeth into, especially something with a foreign flavor and an unusual twist, Varrone's novel should satisfy."

Robert Bell, the William R. Kenan Professor of English at Williams College, says, "A splendid novel. I love how competing accounts of what's happening play off each other, and how the mystery isn't resolved until the very end. I got so caught up in the story that I read the last 250 pages in one sitting!"

Crescent Varrone, originally from New York, has lived and worked abroad for most of his adult life. He is a Fulbright Scholar and graduate of Williams College and Cambridge University with degrees in political science and economics. Crescent now lives in Denmark with his wife and three children. He serves as the chief strategist for a global manufacturer of wind turbines.