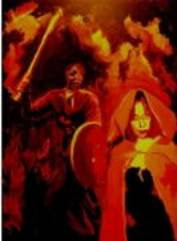 Book Two of the Sharma Chronicles

Colorado Springs, CO - June 2, 2010 - In Book One of the Young Adult series The Shamra Chronicles, Curse of the Shamra, author Barry Hoffman introduces the reader to Dara.

She is a young Shamra girl who, after her peaceful country is invaded, defies the patriarchal and oppressive rules of her society and leads a ragtag resistance in the hopes of defeating their conquer ors. Although she is criticized for being outspoken, "different", and wild she never gives in to the pressure to conform.


She eventually gains the respect of her people, and demonstrates to them how being true to one's self is the greatest honor one can achieve in life.


Shamra Divided continues Dara's adventures, as she sets off to faraway lands to learn more about her heritage, why she was the one who was meant to lead her people to freedom, and what future challenges are in store for her that she must mentally, emotionally, and spiritually prepare for.


A few of the themes you will find explored in Shamra Divided are:


-The empowerment of females as leaders, warriors, and scholars.

- Making contributions to society that will leave a lasting mark.

- The importance of knowing one's heritage and honoring our ancestors.

- The role of personal responsibility.

- The challenge to explore life beyond the familiar comforts of home.

- The depths and bonds of friendship.

- Making decisions and sacrifices that help the greater cause, as well as one's

Barry Hoffman is a magazine and book publisher, award-winning author and former inner-city public school teacher. He always felt, while he taught, that there was a lack of interesting, educational and moving young adult fiction, especially books that highlighted a female protagonist. He decided to do something about it by creating The Shamra Chronicles. In 2009 Curse of the Shamra: Book One
of the Shamra Chronicles (Gauntlet Press) was published to critical acclaim followed by Shamra Divided in 2010, and Chaos Unleashed (coming 2011).


Hoffman's writings have appeared in numerous magazines and anthologies. He is the author of seven novels and short stories, and his work has been praised by Publishers Weekly, Booklist, Fantasy & Science Fiction, among others. Most recently Hoffman donated over 10,000 copies of Curse of the Shamra to schools and other educational institutions.