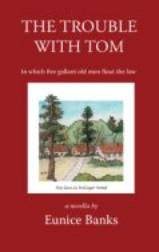 humorous fiction, The Trouble With Tom.

A rogue turkey is making life miserable for the residents of Whisper Wood, an idyllic retirement community nestled in the Sierra Nevada Foothills. Feisty and always hungry, the bird is constantly asserting his right to respect. Ripping screen doors. Devouring heirloom roses. Swiping newspapers. And that's just for starters.

Worst of all? A slow moving bureaucracy and onerous regulations stymie neighbor's efforts to rid themselves of their uninvited feathered friend. Now, five men in their golden years will conspire to break the law-and return the streets to peck-free safety.

There's Captain H., a reluctant leader whose wife is an impetuous mischief maker; Chester Jacques, a widower who still talks things over with his wife; Buford Onyx, who claims to be retired CIA; Ernest Trauts, a brawny, mustachioed character, who vows revenge for his gobbled-up roses; and Jay Beasley, whose wife is one of the turkey's few defenders. But as they soon discover, getting rid of a bird is no simple turkey trot. And in the process, each will realize something about himself that will leave him forever changed.

Part modern day range war, part kidnapping and part road trip, this hilarious and
brilliantly drawn novella takes a wry but compassionate look at the culture of retirement communities across the nation as they interface with rural America.

The Trouble With Tom by Eunice Banks

Eunice Banks is a writer of poetry and fiction, and a visual artist. She has exhibited on five continents and in most major cities across the United States.

Banks was chosen as one of 300 women worldwide to show their work at the United Nations Fourth World Conference on Women, held in Beijing. She lives in Northern California with her husband and a cat that thinks he is head of household.

Eunice said…
Cheryl, Thanks for posting my book, The Trouble with Tom. Please take a look at my updated synopsis and a very nice review from Midwest Book Review at www.outskirtspress.com/eunice_banks
October 20, 2010 at 6:11 PM