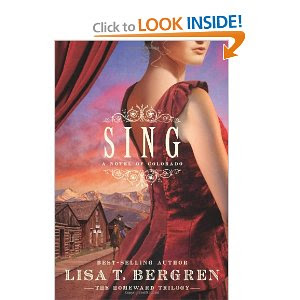 Odessa St, Clair McAllan and her husband, Bryce have settled into ranch live on the Circle M ranch. Unfortunately, things are not easy. They just survived their first harsh winter and did not fair so well. They lose almost all of their stock. Bryce talks about going across seas to pick up more live stock. Odessa does not want Bryce to go as the last time he went, he almost die from something he caught while traveling.

Moira St. Clair is living in Paris. She is a famous opera singer. Moira goes to the bank to make a withdrawal, only to discover that her manager, Max Foster has emptied her whole account and ran off with a younger woman. Moira realizes that there is nothing left for her in Paris and decides to leave.

Dominic is in Rio de Janeiro. Not by his choice. Due to some debts he racked up, he is a prisoner and trying to work off his debts.

Will the St. Clairs ever be reunited again?

Sing is book two in the Homeward trilogy. I did have some problems jumping right into this book. The beginning of the book, quickly jumped from character to character, trying to catch up the readers on what had transpired in the first book, Breathe. My issue with not having read the first book is that I felt like because I hadn’t read the first book that maybe it would have helped me feel a better connection with the characters. For this fact alone, I found it a bit hard to read this book and fully enjoy it. The only people I found interesting was Odessa and her sister, Moira. I thought Mrs. Bergren did a pretty good job on this book. Also because she is a fellow Coloradoan and because I did like this book, I do plan to try Mrs. Bergren again in the future.
Lisa T. Bergren