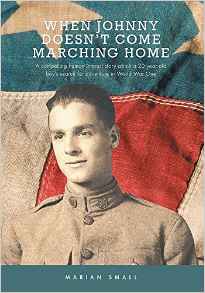 Title: When Johnny Doesn’t Come Marching Home
Author: Marian Small
Publisher: Friesen Press
Pages: 341
Genre: Memoir
First-time author Marian Small’s WHEN JOHNNY DOESN’T COME MARCHING HOME does for World War I what Tom Brokaw’s THE GREATEST GENERATION did for World War II.
Written as a memoir of her father, WHEN JOHNNY DOESN’T COME MARCHING HOME expands to pay tribute to the generation that fought in the trenches and on the battlefields of what has been called the “forgotten war.”

Employing an inherited cache of her father’s letters home, his diary of the war, and voluminous family and historic photographs, Small, at age 89, has scrupulously created a narrative rich in vivid, sometimes heartbreaking detail of First Sgt. John Small’s experiences on the front lines and as a returning wounded veteran.

As a young man touched with the “spirit of adventure,” John R. Small enlisted in the Ohio National Guard in 1916, when he was 20 years old. He was first sent to Gen. John J. Pershing’s command on the Texas/Mexican border in pursuit of the legendary revolutionary and bandit Pancho Villa. When America entered World War I, in 1917, Small was mustered into the Army and promoted to sergeant. His unit was sent to France in 1918. Among his personal possessions was a diary given to him by his wife, Mary. He made almost daily entries during his time witnessing and enduring the horrors of the war.

John Small was severely wounded by a high explosive during the Meuse-Argonne campaign. His legs were badly mangled. After six months in hospitals in France, he was sent home. “At the tender age of 23 years, Johnny didn’t come marching home,” says Marian Small.

Although John Small’s incredible story took place nearly 100 years ago, it is still relevant today as American troops continue to be deployed around the world in harm’s way. WHEN JOHNNY DOESNT COME MARCHING HOME is certain to appeal to military history buffs, veterans, their families and friends, and readers who enjoy a compelling tale.

Marian Small believes that her book is unique “in that every word is true as told by Johnny in his diary or in his letters as narrated by me. I do not believe it can be compared to any other World War I war story that I have read or that has been written.”
Readers are sure to agree with her.

I do enjoy my historical stories of the brave men and women who fight for our freedom. Although, most of my reading has been surrounding WWII. Thus the reason I wanted to check this book out as I am not as familiar with WWI. I really appreciated all of the pictures and snippets of letters and communications involving the author's father. This helped to bring me closer to Johnny. As well as gave me visual insight into life back then both in the war and civilian. The doughboys really had a dangerous job being up in the trenches and the front line. This is a quick read. Yet, despite all of the pictures and the subject matter, I did not find myself as closely engaged in this story as a whole. However, it was an enjoyable read. If a reader wanted to get a glimpse into what it was like fighting in WWI, then this would be a book worth checking out.

Marian Small was born in Cleveland, Ohio; she has been writing for most of her life. She began her 25 year business career as a secretary, a cashier and manager of a Detroit mortgage company, and as an Operations Manager of a Florida stock-brokerage firm. She moved to Beverly Hills, Calif. with her the 10-year-old son from her first marriage and became the Administrative Assistant to a Vice-President of the Regional Office of the same brokerage firm, which entailed frequent stints within the Wall Street office.  She married again in 1973, at age 46. She and her husband shared a 34-year long marriage before they divorced. After surviving breast cancer and minor strokes, Marian resumed writing at age 86 and has been writing ever since.
For More Information


August 1: Worked hard all day taking over and assigning more men to my Platoon sector. Aeroplanes continually flying over our dugout. A few shells went over early in the evening. Wrote letter to my wife this night while lying on the floor of my dugout with only a candle to light the darkness.


My Dear Wife: It has been several days since you last heard from me, and now, while waiting for ‘mess’, I will endeavor to keep you acquainted with the experiences I am allowed to tell you about. I say ‘experiences’, Honey, for since I last wrote to you, they have been many. War has vividly impressed them in my memory and I will never forget them. I will be able to tell you all when I come back to you, free from all the privations which we soldiers have to encounter. We will live and love all over again.


I have been on the go since I last wrote to you. We left our station and marched through shell-torn towns, up and down hills, and reached a place where we stopped to camp at three in the morning. Everyone was almost dead from the long march in the dark. To tell you the truth, ‘War is Hell’, emphasis on the ‘Hell’.


We lay in the Camp undercover, not allowed to march in the daytime on account of enemy aeroplanes. We left this Camp in the evening at 8:30 and, with the heavy load we each had to carry, hiked again in the night with aeroplanes flying overhead and bombs bursting everywhere. Six hours later we reached our destination.


When we set out on these marches, we never know where we are going. We are now in the trenches, I know not where.


From here, my experiences and love for adventure grew and I will relate only parts of it since we are severely censored now.


The first thing that I took notice of was the crack and roar of the heavy shells passing overhead. Honest, I never felt so lonesome as then for our little cottage in