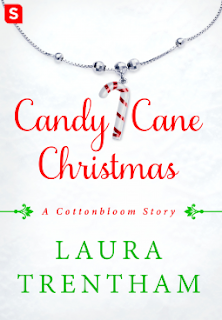 Jeremy Whitehurst has tried to leave his bad-boy behavior and tarnished image behind in Alabama for a fresh start in Cottonbloom, Louisiana. Unfortunately, trouble has dogged him across state lines. Stepping up and protecting a young woman from her abusive boyfriend earned him a beat-down and got him fired. Although the thanks in the girl’s dark eyes made it all worth it, he recognizes she’s just a different kind of trouble. A trouble he’s not sure he can stay away from.

One rebellious summer dented Kayla Redmond’s carefree innocence. Now her focus is on completing her associate’s degree for bookkeeping, and no one is going to derail her plans.

Unfortunately, her job at Fournette Brothers Designs puts her in the path of the one man who has seen her at her worst, yet his blue eyes don’t judge her. He sees beyond the brokenness inside of her and rouses her wild side once more. But, that’s what got her in trouble in the first place.

Christmas is coming and Kayla’s ready to forgive herself and take a chance. But the holiday has only ever brought heartache to Jeremy. No Christmas miracle kept his mother clean or out of jail. Will one reckless night and some time spent in the back of a cop car be the best present Jeremy’s ever been given?

This is a fine short story. However, I found it lacking in a really good character development and story. It seemed that I kept waiting for the story to really pick up with excitement. In addition, the chemistry between Jeremy and Kayla was more like friends then lovers. I read the sex scenes and had no reactions, except for the first meeting between Jeremy and Kayla. That scene I did feel some steam. Again, I did not mind the length of this book as short stories can be just as great as full length novels; I just wished that the things that I pointed out had been there and then I would be writing a different tune about this book.
Laura Trentham