Showing posts from November, 2020
Show all

5,203 Things to Do Instead of Looking at Your Phone 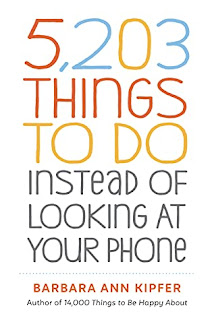 Because life is calling.   Put down your phone, close the lid on your laptop, and get back in touch with the wonders of the world around you. With thousands of ideas for simple, beautiful things to do instead of scrolling down the rabbit hole of cyberspace, this healing little book offers the opportunity, 5,203 times, to slow down, look up, and rediscover what makes you feel nourished and grounded as a human being. With illustrations throughout by Scot Ritchie. And here are some ideas from the book to get you started: Smile at a stranger Put a bag in your car for litter Write a letter to your future self Plan a 24-hour liquid diet Notice the air on your skin Do calligraphy for a party invitation Go for a silent drive Make an accordion book Plan a beach day Visit a botanical garden  Keep a journal of the most beautiful things you see Talk to someone who needs company Design a book cover Watch a cat drink or eat My Review This is a fun guide book. During the current state of events in
Post a Comment
Read more

Pretending : A Novel  Holly Bourne On Sale Date: November 17, 2020 9780778331506, 0778331504 Trade Paperback $17.99 USD 416 pages ABOUT THE BOOK: In this hilarious and heartbreaking debut novel perfect for fans of Fleabag, a woman struggling to move on after a traumatic relationship pretends to be “the perfect girl” in an act of vengeance that goes awry when she finds herself emotionally compromised. He said he was looking for a 'partner in crime' which everyone knows is shorthand for 'a woman who isn't real'. April is kind, pretty, and relatively normal - yet she can't seem to get past date five. Every time she thinks she's found someone to trust, they reveal themselves to be awful, leaving her heartbroken. And angry. Until she realizes that what men are really looking for is Gretel. Gretel is perfect - beautiful but low maintenance, sweet but never clingy, sexy but not a slut. She's a Regular Everyday Manic Pixie Dream Girl Next Door With No Problems
Post a Comment
Read more

Jessica thought she was prepared to be married to a soldier, but with each deployment, Danny pulled further and further away, and she felt her love hadn’t been enough. Even his best friend, Anton couldn’t seem to reach him. Before his last deployment, Danny told Anton to always take care of Jessica, as if he knew his fate. When Danny returns home in a casket, the guilt of not being able to save him comes crashing down on them both. And for Anton, he carries the guilt of always loving Jessica but keeping those feelings to himself. Can Anton honor Danny’s request and convince Jessica to cast aside their guilt in order to turn their friendship into love? My Review I liked this short story from author, Laura M. Baird. While, there is chemistry shared between Jessica and Anton, it was just a sliver featured in this story. The moment(s) were short and brief. Although, it was enough to allow me to imagine Jessica and Anton settling down and having a good life together.  I think any reader w
Post a Comment
Read more 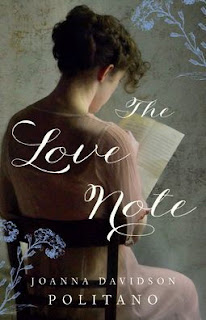 Focused on a career in medicine and not on romance, Willa Duvall is thrown slightly off course during the summer of 1865 when she discovers a never-opened love letter in a crack of her old writing desk. Compelled to find the passionate soul who penned it and the person who never received it, she takes a job as a nurse at the seaside estate of Crestwicke Manor. Everyone at Crestwicke has feelings—mostly negative ones—about the man who wrote the letter, but he seems to have disappeared. With plenty of enticing clues but few answers, Willa's search becomes even more complicated when she misplaces the letter and it passes from person to person in the house, each finding a thrilling or disheartening message in its words.  Laced with mysteries large and small, this romantic Victorian-era tale of love lost, love deferred, and love found is sure to delight. My Review I was looking forward to reading this book. While, it started out slowly for me, I kept reading as I did like the lovely t
1 comment
Read more 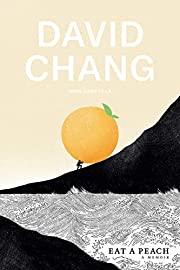 In 2004, Momofuku Noodle Bar opened in a tiny, stark space in Manhattan’s East Village. Its young chef-owner, David Chang, worked the line, serving ramen and pork buns to a mix of fellow restaurant cooks and confused diners whose idea of ramen was instant noodles in Styrofoam cups. It would have been impossible to know it at the time—and certainly Chang would have bet against himself—but he, who had failed at almost every endeavor in his life, was about to become one of the most influential chefs of his generation, driven by the question, “What if the underground could become the mainstream?”   Chang grew up the youngest son of a deeply religious Korean American family in Virginia. Graduating college aimless and depressed, he fled the States for Japan, hoping to find some sense of belonging. While teaching English in a backwater town, he experienced the highs of his first full-blown manic episode, and began to think that the cooking and sharing of food could give him both purpose and
Post a Comment
Read more 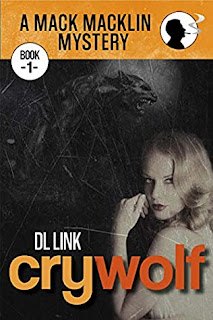 Mack Macklin thinks he can’t go any lower. Getting a beatdown from a giant wearing bright yellow yoga pants proves he can. When his buddy from better days offers him a job, he jumps at the chance. A couple of days out of town and cash to keep his bookie’s enforcer off his back, all in return for a puff piece on an old lady who thinks she saw a werewolf. What could go wrong? Turns out, a lot. Mack is a skeptic’s skeptic, trained to look at everything through the critical eye of a veteran reporter, but even he can’t explain the pack of hairy man-beasts that attack him. They leave him near death, which is a damn sight better than local residents seem to be faring.  Can he find the silver bullet of truth, or is it time to  Cry Wolf ? The Mack Macklin Mysteries  follow a disgraced, and morally degenerate, reporter as he dodges debts, investigates the unbelievable, and rips the masks off the bad guys. Get on the Mack bus today to meet the new face of pulp fiction. My Review I liked this bo
Post a Comment
Read more A Christmas Carol Murder by Heather Redmond on Tour November 1 - December 31, 2020 Synopsis: The latest novel from Heather Redmond’s acclaimed mystery series finds young Charles Dickens suspecting a miser of pushing his partner out a window, but his fiancée Kate Hogarth takes a more charitable view of the old man's innocence . . . London, December 1835: Charles and Kate are out with friends and family for a chilly night of caroling and good cheer. But their blood truly runs cold when their singing is interrupted by a body plummeting from an upper window of a house. They soon learn the dead man at their feet, his neck strangely wrapped in chains, is Jacob Harley, the business partner of the resident of the house, an unpleasant codger who owns a counting house, one Emmanuel Screws. Ever the journalist, Charles dedicates himself to discovering who's behind the diabolical defenestration. But before he can investigate further, Harley's corpse is stolen. F
1 comment
Read more

Description Ages 14 and up Happily ever after is only the beginning as Belle takes on the responsibility of becoming queen and learns to balance duty, love, and sacrifice, all while navigating dark political intrigue-and a touch of magic. It's 1789 and France is on the brink of revolution. Belle has finally broken the Enchantress's curse, restoring the Beast to his human form, and bringing life back to their castle in the province of Aveyon. But in Paris, the fires of change are burning, and it's only a matter of time before the rebellion arrives on their doorstep. Belle has always dreamed of leaving her provincial home for a life of adventure. But now she finds herself living in a palace, torn between her roots as a commoner, and her future as a royal. When she stumbles across a mysterious, ancient magic that brings with it a dire warning, she must question whether she is ready for the power being thrust on her, and if being Queen is more than just a title. Rebel Rose  i
1 comment
Read more

No Place to Hide 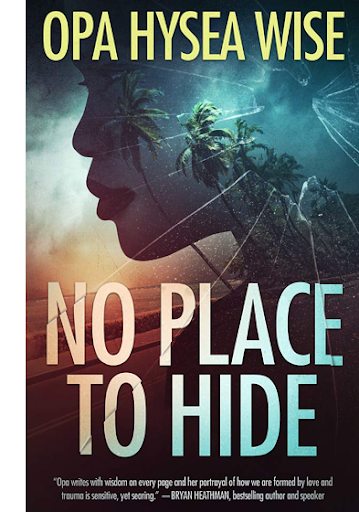 ABOUT THE BOOK: Against hope, Smythe Windwalker Daniels anonymity is compromised and a threat has been made against her life. The danger impacts not only her life but the lives of those around her. She reluctantly accepts the FBI’s protection, hoping to testify and bring a promise of justice to a community. Smythe is a woman with vision in her eyes and fire in her soul. From a young age, Smythe was discriminated against as a mixed race girl in a predominantly white neighborhood. She travels to Hawaii to escape the corporate rat race, only to get entangled in a pesticide poisoning cover-up attempt by a mega corporation. While on the run, she seeks to find meaning in events that now threaten her life. Through a series of misadventures she discovers how all events are all woven together in this tapestry called “life.” As she uses her past experience to find meaning in her present, she begins to see beauty in the midst of chaos. But the harder she tries to hide, the more difficult it is to
Post a Comment
Read more 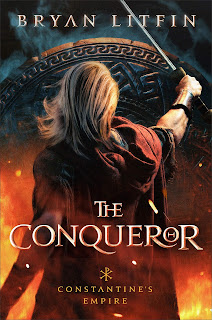 It is AD 312. Rome teeters on the brink of war. Constantine's army is on the move. On the Rhine frontier, Brandulf Rex, a pagan Germanic barbarian, joins the Roman army as a spy and special forces operative. Down in Rome, Junia Flavia, the lovely and pious daughter of a nominally Christian senator, finds herself embroiled in anti-Christian politics as she works on behalf of the church. As armies converge and forces beyond Rex's and Flavia's controls threaten to destroy everything they have worked for, these two people from different worlds will have to work together to bring down the evil Emperor Maxentius. But his villainous plans and devious henchmen are not easily overcome. Will the barbarian warrior and the senator's daughter live to see the Empire bow the knee to Christ? Or will their part in the story of Constantine's rise meet an untimely and brutal end? Travel back to one of the most pivotal eras in history—a time when devotion to the pagan gods was fading
1 comment
Read more
More posts