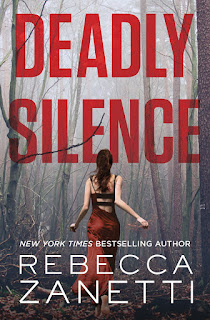 Under siege. That's how Ryker Jones feels. The Lost Bastards Investigative Agency he opened up with his blood brothers has lost a client in a brutal way. The past he can't outrun is resurfacing, threatening to drag him down in the undertow. And the beautiful woman he's been trying to keep at arm's length is in danger...and he'll destroy anything and anyone to keep her safe.
Paralegal Zara Remington is in over her head. She's making risky moves at work by day and indulging in an affair with a darkly dangerous PI by night. There's a lot Ryker isn't telling her and the more she uncovers, the less she wants to know. But when all hell breaks loose, Ryker may be the only one to save her. If his past doesn't catch up to them first.
Full of twists and turns you won't see coming, DEADLY SILENCE Rebecca Zanetti at her suspenseful best.
My Review

For the first book a series, this is a good one. I just felt like it was about the romance between Ryker and Zara then about the murders. However, I liked Ryker and Zara, so I am not complaining. They had anything but a "casual" relationship. So glad they realized this and decided to make it permanent. Ryker's brothers, Heath and Denver were awesome as well. The witty banter between the brothers had me laughing and smiling. Due to the fact that I enjoyed all of the main characters in this book, it was very easy to read. The last half of the story is where I would say that it did pick up regarding the murders. However, the murders were not the intriguing part about the story but the backstory and someone from the guys past that had me wanting to read more. I do look forward to checking out the next book and getting to know Heath and Denver better as well as seeing Ryker and Zara again.
Rebecca Zanetti