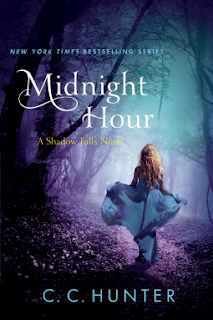 A missing sister, a heart in turmoil, and a growing tattoo that no one understands...C. C. Hunter brings The Shadow Falls saga to a spectacular conclusion in this thrilling finale: Midnight Hour!
Being a dyslexic witch has never been easy for Miranda Kane, but her time at Shadow Falls helped her tap into her true powers. Now her life is thrown into chaos after a near death experience leaves her with a mysterious growing tattoo no one can explain. Her heart is a mess over whether to get back together with Perry or take a chance on a new love, her parents are spitting up, and she may not get into the same college of her two best friends. To upend her world further, it appears her sister has been kidnapped and it’s not just her they want. Miranda’s only way of saving her sister may be to take her place. Will her friends at Shadow Falls save Miranda…or will she realize that she had the power to save herself all along?
My Review

I somehow missed that this was the last book in this series. I just got excited when I was this book and the chance to review it. I thoroughly enjoyed the Shadow Falls series and I can remember reading a little snippet about this spin off series and was excited to check it out. Sadly, I have not picked up any of the books in this spin off series. Yet, from what I read in this book I would like to go back and check out the prior novels.

I enjoyed visiting again with Miranda and Della from the original series. They have both grown since then. Because I have not read the prior novels, I did miss forming that strong bond with everyone else in the series as well as the suspense leading up to this finale. Although, I did find that the second half of this book was stronger and more thrilling then the first half. The second half is where the action and the speed of the story grew. I became more interested in the story. The ending seemed to be a fitting one for what Miranda and her friends had to endure.