If Santa were a Cowboy 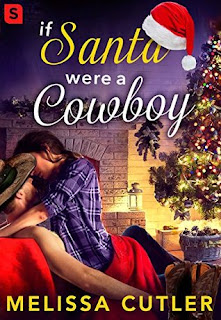 This Christmas, Santa wears a Stetson.

Paul Savage loves Christmas at Briscoe Ranch Resort, when he gets to take a break from being a back country guide to play Santa in the resort’s lobby and talk to kids about toys. The last thing he expects is his high school crush to come waltzing in as his new assistant photographer, wheeling a suitcase that's more naughty than nice.

Kelly Walker is a disaster. All she’d wanted was spice up her life by saying ‘yes’ to every opportunity, which is when the universe started pelting her with ‘no’s. So when she comes across a job listing for a holiday photographer working with the sweet, scrawny boy whose advances she’d laughed off in high school, she jumps on the chance to turn her bad Karma around by giving Paul a second chance.

Trouble is, Paul’s anything but scrawny anymore, and his cowboy swagger throws her grand plans for a loop—especially when he tempts her with a red hot proposition of his own. Kelly’s in way over her head, but as she gets swept up in the magic of Briscoe Ranch’s holiday charms—and Paul’s—could Kelly’s year of ‘no’s be leading up to the ‘yes’ of a lifetime?

A cowboy Santa...Yes, please! Paul made a great Santa. He sure had the patience of a saint and the way he interacted with children had my heart filled with joy. Kelly was another story. Yes, I liked her but she was not the seductress that she pretended to be. Yet, I give her credit for trying. What with her suitcase full of sex toys. Which just happen to spill all over the lobby filled with families. The funniest moment was when Paul's dog, Sadie, took off running with the riding crop thinking it was a stick. As the saying goes "First impressions are the most important".

While I did feel chemistry between Paul and Kelly, I did not quite experience the rising heat. There was the passionate kiss in the closet and the bedroom scene but it was short and brief. In fact, the kissing scene was hotter then the bedroom one. Just, I did find this book to be a sweet read for the holidays.
Melissa Cutler