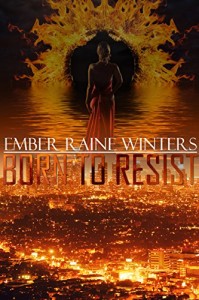 Title: BORN TO RESIST
Author: Ember Raine Winters
Publisher: Independent
Pages: 191
Genre: YA Dystopian
“I never thought one moment could change my life forever. In an instant life as I knew it was over. My new life was the stuff of legends. I just hoped I was strong enough to survive it.”

A series of what were called The Immigration Wars changed the way of life for the former United States. It was thrown into chaos and a dictator came into power.

On the eve of Alexa’s sixteenth birthday her world changes forever. Her father is arrested for treason and she finds out her mother is really alive. She and her best friend Jacob must travel across country to meet her so they can free her father from the tyrannical leader of the government. Everything is not as it seems in the resistance and secrets and lies will be revealed along the way.

They must rely on each other and their new friends to be successful. But, trust isn’t easily given in the resistance and Alexa must find a way to save her father and keep her friends safe while on the run from both the government and the resistance.

I enjoy the dystopian genre. However, lately the past several books I have read in this genre were not up to par. They seemed to be lacking in a strong plot and characters. As if the authors were rushing to produce a book to get on the dystopian train wave. Yet, author, Ember Raine Winters does it right with her first novel, Born to Resist.

Instantly, I connected with Alexa and Jacob as well as where the story was going. I could picture the world that Alexa and Jacob lived in. So Alexa and Jacob have a romantic relationship in this story but it is not overplayed to the point that it distracts from the overall storyline. Everyone from Alexa, Jacob, Xander, and Kara were strong characters. Another aspect that I enjoyed about this book. Sometimes in this type of genre the authors feel like they have to make the leading female heroine weak in the beginning leading up to a fighter. Yet, Alexa was a fighter from the start. In addition, she was not easily fooled. I can't wait to continue with the next book to see if Alexa, Jacob, Xander, and Kara can take down RONA.


Pick up your copy at 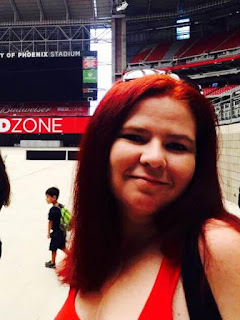 Ember Raine Winters is a single mother of 2. Living in Bakersfield California. She has an Associate’s Degree in Political Science and Philosophy from the Local Junior College and she loves to read. Anything she can get her hands on, but mostly Science Fiction and Fantasy. She self-published her first book in March and hopes to publish many more in the future.


Connect with Ember at

“Alexa, where are you going?” Dad asked as I picked up my crossbow and strapped my hunting knife to my thigh.
“Hunting, be back before dinner,” I replied just before the large mahogany door slammed behind me.
I went hunting every day and my dad knew that, but he always asked where I was going. I thought it was just him being overprotective. Clearly, there was a reason behind everything he did.
He was my confidant, my teacher, and my friend. In the world we lived in there weren’t any schools like in the old world, so my dad had to teach me everything. He was ex-military before the Immigration wars and taught my best friend Jacob and me everything we needed to know to not only survive, but also defend ourselves. I never understood why we would need to know how to be the perfect soldiers living in our little town in back woods Texas, but I didn’t complain. I loved hunting and shooting. Plus, I was good at it.
Walking through the forest on a hunt has always been somewhat therapeutic for me. I walked through the forest quietly. I always found the sights and sounds intoxicating. The bright yellow sun peeking through the canopy of dense pines. The smell of pine and the sounds of blue jays singing made it feel like home. I walked for miles in the dense underbrush listening intently for any quail, turkeys, or even a rabbit to hunt.
An almost eerie silence fell over the forest. It was unnaturally quite in a place that moments before was teeming with life. I stopped short overwhelmed by the sinking feeling that something was terribly wrong. Listening carefully, I heard a gentle hum that got progressively louder by the second. After a few minutes that stretched into an eternity, the hum became the roar of an engine and darkness fell over the trees. Looking up through the branches, a plane, and close enough to see through the trees. Not good. There were no planes anymore. Not running. Jet fuel cost far too much for even the wealthiest of men, and the only person who had clearance to fly was President Carlyle, anyway. I had never seen his plane fly through our town before, and my gut said that something wasn’t right.
So, I took off at a sprint pumping my arms and legs just as fast as they would take me. I was about four miles from home and even at a dead sprint it took more than twenty minutes zig-zagging through the trees and jumping over roots before I broke the tree line. I zigged past the old oak that Jacob and I used to play in when we were young. The thick branches are a stark contrast to the spindly branches of the pines surrounding it. I ducked beneath a low-hanging branch that I was once able to walk underneath, but my tall five foot nine inch frame would have been decimated at the speed I was running. The burning sting as the branches whipped across my skin was almost bearable, even the oozing blood trickling down my face and arms didn't compare to the cold hard dread I felt deep in my bones as I pushed myself forward.
Once I reached the corn field I stopped dead. An all-consuming fear stole my senses when I saw the plane sitting off to the right of our old ranch style home. I dropped like a brick to my knees and drug in one raspy breath after another. What could be happening?