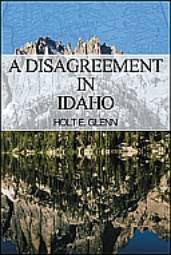 A Disagreement in Idaho Holt E. Glenn's timely new action and adventure novel may turn out to be the definitive work on illegal immigration as it dramatically explores the consequences of continuing to ignore our immigration laws.

Winnabow, NC - July 29, 2010 - Author Holt E. Glenn announces the release of his new fiction work, A Disagreement in Idaho. Glenn's novel explores what would happen if tne state, frustrated with the federal government's refusal to do anything about the local incursion of illegal immigrants, took matters into its own hands.

A Disagreement in Idaho is set in the beautiful and rugged lands of Idaho in the style of a grand western novel, but political intrigue weaves contemporary themes into the actions of Governor Seabon Wilson, whose state is overrun by illegal immigrants. He does not want to do battle with federal authorities, but he finally decides he can no longer stand idly by.

He proposes legislation that will deny illegal immigrants all social and medical services and educational opportunities. Employers who hire illegal aliens face stiff fines. The governor then suddenly finds himself in direct conflict with federal policies.

The situation in Idaho begins to spiral out of control and the governor and his wife now find their lives affected in ways they had not been able to imagine. The President of the United States is forced to react when he sees this problem is not going to fade way.

The cleverly conceived plot of A Disagreement in Idaho casts a long shadow across America, down into Mexico, into the Caribbean and then on toward Afghanistan, where the country continues to fight a war. Glenn's adventure provides a classic look at federal versus states' rights and - in these days of Arizona's new immigration laws -- a pertinent warning about executive orders and martial law.

Appropriately enough, Glenn dedicates his novel to the American worker "who hammers the nails, cuts the wood, pours the concrete, lays the tile, paints the walls, whose very livelihood is being threatened by this unabated invasion of illegal immigration."

A Disagreement in Idaho by Holt E. Glenn