Cheryl Brooks is my Hero 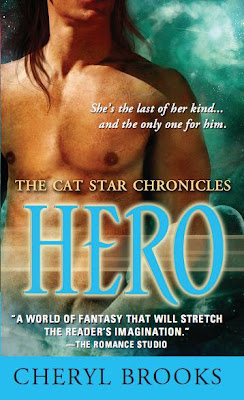 Hero is Tragonathon “Trag” Vladatonsk’s story. Trag was in Rogue, the third book. Trag is lonely and wants to settle down. Though, Trag won’t settle for anyone less then a fellow female Zetithian. A female Zetithian is rare. Trag is willing to wait.

Micayla Johnson works on Orleon Station. She is the last Zetithian female. Micayla is spotted by Rutger Grekkor, head of the Commerce Consortium. Rutger despises the Zetithian males. Micayla over hears Rutger gloating about destroying Zetith. When Rutger spots Micayla he aims to take her. Micayla runs and ends up on a space craft with Trag. Trag’s first meeting with Micayla is not lover at first sight. Will the second time around be the charm?

Hero is the sixth book in the Cat Star Chronicles series. I have lapped up every single one of these books. It was great to see Trag again and to get to know him better. Trag is a brooder. Though, I could forgive him, as he is too good looking for his own good. Micayla made me laugh. They way she first reacted to Trag was funny. Every time she got near him, she would hiss or want to bite him. I like that Micayla opened up fairly quickly and became likeable. Trag and Micayla make a good match. If you love sci-fi, romantic paranormal fantasy mixed with a little erotica then you will love these books. Cheryl Brooks is my Hero. I can’t wait to get my hands on book seven, Virgin.
Cheryl Brooks

Nancy Bristow said…
As a fan of Cheryl's I couldn't agree more with your great review:) So far I have the entire series and am anxiously waiting to get my hands on HERO. I'm only jealous because you've read HERO and I haven't YET;)
July 27, 2010 at 12:59 PM