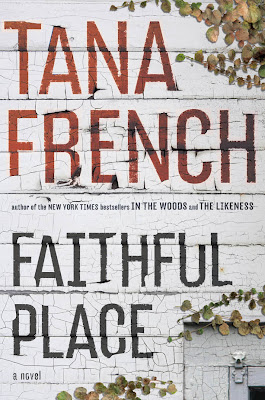 Faithful Place
Back in 1985, Frank Mackey was nineteen, growing up poor in Dublin's inner city and living crammed into a small flat with his family on Faithful Place. But he had his sights set on a lot more. He and his girl Rosie Daly were all set to run away to London together, get married, get good jobs, break away from factory work and poverty and their old lives.

But on the winter night when they were supposed to leave, Rosie didn't show. Frank took it for granted that she'd dumped him - probably because of his alcoholic father, nutcase mother, and generally dysfunctional family. He never went home again.

Neither did Rosie. Everyone thought she had gone to England on her own and was over there living a shiny new life. Then, twenty-two years later, Rosie's suitcase shows up behind a fireplace in a derelict house on Faithful Place, and Frank is going home whether he likes it or not.

Getting sucked in is a lot easier than getting out again. Frank finds himself straight back in the dark tangle of relationships he left behind. The cops working the case want him out of the way, in case loyalty to his family and community makes him a liability. Faithful Place wants him out because he's a detective now, and the Place has never liked cops. Frank just wants to find out what happened to Rosie Dalyâ€”and he's willing to do whatever it takes, to himself or anyone else, to get the job done.

Penguin Books invites you and your readers to join the celebrated mystery author, Tana French, for a chat at the Penguin Water Cooler on Tuesday, July 20th at 1:30 PM ET, hosted here on the Penguin USA website!
Tana French