The Messenger of Athens 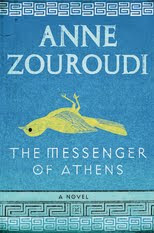 Irini Asimakopoulos’s body has been found at the bottom of a cliff. She has been dead for two days. The local police of chief chalks Irini’s death up to a suicide.

Hermes Diaktoros has been displaced from the city of Athens to investigative the murder of Irini. When Hermes arrives he finds he is not welcome. The police think Hermes will come to the same conclusion as they did…suicide. Hermes can feel that Irini’s death was not a suicide but a murder. He aims to uncover the truth. No matter what steps he has to take to get to the bottom of the truth.

This book was like reading the mystery board game version of Clue. It was like it had to be the husband because he is the most obvious choice. Then Hermes would come along and disprove the notion and he would explain why. The thing I found unusual and funny was that Hermes was known in the book as “the fat man”. Hermes was over weight but I found it funny that he was called that. The story would switch at times like it was being narrated and this is what the narrator called Hermes, so as not to confuse him with some other character. While I liked this book on the one hand for Hermes and the way he solved the case; the other hand I found most of the characters boring and at times the story line dry and slow moving. Though, I am willing to give Anne Zouroudi another try in the near future.
Anne Zouroudi