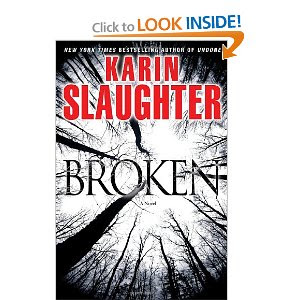 Grant County Officer Lena Adams is called to the scene down at the lake. A young woman has been found in the lake. The girl’s throat was slashed. Lena and her partner, Frank Wallace follow up on a lead. There lead take them to the house of Mr. Braham. Inside the house they find a man wearing a ski mask and holding a knife. The man is Tommy Braham. The police arrest Tommy.

Dr. Sara Linton has returned to Grant County after a long extended absence. Tommy is a patient of Sara’s. When Sara learns that Tommy is the main suspect in the murder investigation, she asks FBI Special Agent Will Trent to prove Tommy’s innocence. Will quickly finds himself in the middle of Sara and Lena. Which one can he really trust?

Broken is book eight in the Grand Country series. It has been a while since I have read a Karin Slaughter book. I thought this book was nice re-introduction to this series, though this book wasn’t quite a slam dunk for me. I mean it was nice to revisit with Will Trent as I like him as a character. I remembered Sara but could not remember what had transpired between her and Lena. Luckily, Ms. Slaughter brought back the details. The only reason that I didn’t give this book a five star rating is because I felt that the level of suspense did not stay consistently strong all the way through out the story line. Broken could be fixed. Planning on checking into the next book.
Karin Slaughter