One Season of Sunshine 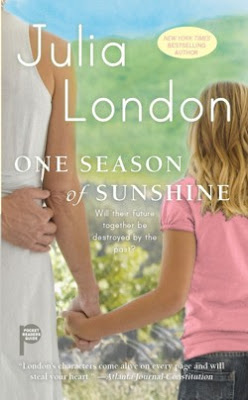 Jane Aaron always knew something was different about her from the rest of her family. She was right. Jane was adopted. Jane loves her parents but now that Jane is grown up, she feels like a part of her is missing. It bothers Jane so much that when her boyfriend, Jonathan proposes to her, Jane turns him down. How can Jane expect to marry someone when she doesn’t really know who she is?

The one thing Jane does know is that she was born in Cedar Springs. Jane moves to Cedar Springs to find out more about where she came from.

Asher is a single dad trying to raise his two children, Riley and Levi. Asher is desperate for a nanny. So when Jane applies for the job, Asher is thankful. The more time Asher spends in Jane’s company, the stronger the attraction he feels towards her grows. Though, when Jane finally learns the truth about her birth mother…will Asher and Jane have a future together?

Having been adopted myself I could understand where Jane was coming from. I like Jane have wonderful parents. Though, I have never felt the need to seek out my birth mother. I liked Jane. She was sweet and not intimated by Riley. I wasn’t really feeling the romance between Asher and Jane. I kind of pictured him more as the father type then the romantic male lead type. I do have to admit that I thought this book moved a bit slow at times. I kind of had an idea of who Jane’s birth mother was and what had happened from the beginning of the set up of this book but didn’t quite know if I was right. It seemed to drag a little when Jane was searching and I wanted the story to speed up. Overall, One Season of Sunshine shows glimmers of hope and sunshine.

Check out the sweepstakes and the prizes you can enter to win here.
Julia London