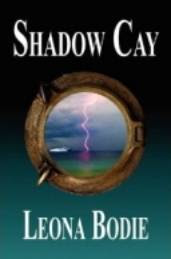 The MDPD Crime Lab was inspiration for some parts of her first novel. This book speaks to the challenges forensic professionals face every day especially in Dade County.

Shadow Cay is a steamy suspense about murder, drug cartel and local corruption taking place in the tropics between Miami and the Bahamas."


The author says, "It's very loosely based on an event from my own past, and it's a book I have been trying to write for more fifteen years. It also helps being married to a forensic specialist."


In Shadow Cay, when industry icons sell their souls, ethical employees become huge liabilities. Palm-fringed Miami with its gateway to Latin America offers two men in different businesses, two unlikely paths to fame and fortune. JaHart International, a much-admired biotechnology company, creates state-of-the art medical solutions. The Salazar Network is the world's most profitable enterprise. These two powerhouses are about to join forces. Their story starts in an island paradise far from corporate America, when Bahamian officials discover a string of offshore tragedies. They presume the victims were lost at sea. One "casualty," Madeleine Nesbitt survives. She plots Rico Salazar's ruination, but no one's ever crossed Rico or his friends and lived to talk about it.


Here's what other people are saying: "Shadow Cay is filled with dark secrets and gripping suspense. Leona Bodie clearly has intimate knowledge of the Bahamas and the profession of forensic science that encompasses more than the cops, fingerprints, and DNA analyses found in most whodunits. Every successful thriller needs both good villains and protagonists, and Bodie's suspenseful novel is a treat to read because of the way the author goes about delineating her characters. Leona Bodie is a fresh new talent in the much-plowed field of mystery books with something interesting and original to say.

Shadow Cay is a 'can't put down' reading experience." -Malcolm D. Mahr, Author of The Secret Diary of Marco Polo and Murder at Paradise Spa.

"Twists and turns, combined with intrigue make this novel hard to put down." -Diane O.

DesRochers, Author of A Matter of Time and Sunflower.

She was born in New Jersey, but lived in Massachusetts and California. A graduate of
airleigh Dickinson University, Leona's career took her from high school English teacher to biotechnology corporate executive and president of the Greater Miami Society of Human Resource Management before she shifted to writing books. She is Vice President of the Treasure Coast Writers Guild, a Group Leader for the Florida Writers Association and lives in Florida with her husband Walt, a former Miami-Dade forensic specialist. She is currently working on a sequel to Shadow Cay.