The Triumph of Deborah

August 17, 2009
I want to thank author Eva Etzioni-Halevy for sending me a copy of her book to review. 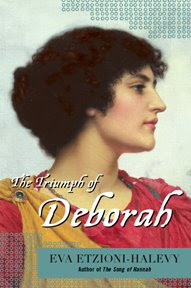 The Triumph of Deborah is the story about Deborah. As the story goes, she was both a prophetess and judge of Israel. She was the only woman in those times to ever hold the title of judge. God wanted his people to live in peace, so he sent Deborah a message to help his people live in harmony. Deborah found just the man to lead an army against the Canaanites. His name is Barak. Barak would only go to battle on one condition…Deborah had to accompany him otherwise he would not go. Deborah agreed but told Barak that he would not be remembered as a great leader. She was right as Deborah was remembered and honored instead.

Something happened during the course of the time, Deborah spent with Barak…she experienced feelings for him, though she was married to someone else. Barak on the other hand had his sights on another woman. After defeating the Canaanites, Barak brought back the two daughters of the Canaanite’s king. Their names are Asherah and Nogah. Barak planned to make Asherah his wife; she on the other hand had no interest in him and despised him as the enemy. Nogah wanted Barak. Even women of the Bible found themselves in ménages.

I have to admit that I was not very familiar with Deborah or her story. After reading this book, I can see why author Eva Etzioni-Halevy chose her story to write. Deborah was an interesting character and a strong woman. Thought I would have liked to have seen her featured more in this book.

She appeared at the beginning and towards the end but it seemed in the middle of the book that it was all about Barak, Asherah and Nogah. I was sad to see Nogah interested in Barak. I thought she was a well-mannered woman who deserved someone better. Barak was abrasive and didn’t seem like he could think for himself.

As much as I did enjoy this story, there were a few times were I started to skim the pages in the middle. This is only because I got turned off by Barak’s attitude and found him uninteresting. I found Mrs. Etzioni-Halevy inspiration for basing her novels on women from the Bible to be uplifting.