August 30, 2009
I want to thank Caitlin with FSB Associates for sending me a copy of this book to review. 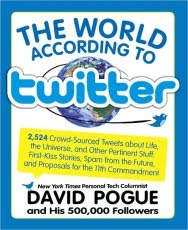 The World According to Twitter is a collective collaboration of humorous, creative, goofy, and some cheesy lines from people that twitter. David Pogue is a weekly tech columnist for the New York Times. He also twitters. He was showing a company how twitter works and told his wife how some of the responses from people were so good but that he wished others could see the responses and not just the person asking the question. His wife suggested he put a book together…and hence The World According to Twitter was created.

Mr. Pogue decided that he would ask a question every night at 11 pm for a while. Why 11 pm? Mr. Pogue explains that this is because hopefully most people would be online from the US to other countries.

Some of the questions asked were:

“What’s the most memorable pickup line you ever heard?”

Some of the responses were:

“I’m thinking about becoming a pirate so I can get some of your booty” or how about “You won’t be able to break my heart, because it melted when I met you”.

Ok so seriously these pickup lines are definitely memorable but I won’t say great.

How about this question “Heard and Good Puns Lately?”

“What do you call a group of rabbits walking backwards?” A receding hare line.

Two TV installers met on a roof and fell in love. The wedding ceremony wasn’t great…but, wow, the reception!!

As the cruise ship faded into the moonlight, Harvey clutched the wet gnome and thought: This wouldn’t have happened to Kate Winslet.

I had never killed anyone before, and I was pretty sure I did it wrong.

If you thought some of these lines were great, than you have to check out The World According to Twitter. It will have you talking and sharing it with your friends. I even had my husband reading parts of this book and laughing.


Join Pogue's world at his website: http://www.davidpogue.com/; at Twitter: @pogue; or at his blog: www.nytimes.com/pogue.
David Pogue

Literary Feline said…
I admit my first thought when I saw the title of this book is that it's probably not something I'd want to read, but you've gotten me curious. It sounds like it would make one of those perfect books for in between reading.