August 05, 2009
I want to thank Anna with FSB Associates for sending me a copy of this book to review. 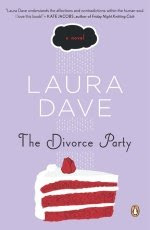 Gwyn Huntington is getting ready to throw the most important party of her life…her divorce party! Yes you hear me right…a divorce party. It is like a tradition to host one, when your divorce is final. It is like freeing yourself of the old and saying I am ready to take on the world again. Someone who can’t understand what Gwyn is going through is Gwyn’s soon to be daughter in law, Maggie Mackenzie.

Maggie has found the man of her dreams and his name is Nate. He comes from a wealthy family. She is ready to settle down. She hopes to make a good impression on Nate’s parents. Maggie won’t have to worry about that as Gwyn is busy preparing to start a new chapter in her life.

I like how each chapter alternates between Gwyn and Maggie. At first Maggie seemed a little shy and out of her element, being around Nate’s parents but as the story progressed she came out of her shell. Each woman comes from different aspects of life but really when you really get down to it, they are more alike then they thought. They are both just looking for someone to love them. I would categorize The Divorce Party as a chick-lit. It has all the qualities of one..humor, fun, female bonding, togetherness, and a book that you and your girlfriends can discuss with each other.

Laura Dave is the author of the acclaimed novels The Divorce Party and London Is the Best City in America. Her writing has appeared in The New York Times, Glamour, Self, Redbook, ESPN the Magazine, and The New York Observer. Dave graduated from the University of Pennsylvania. In August, Cosmopolitan magazine named her as one of the eight "Fun and Fearless Phenoms" of 2008. She lives in California.
Laura Dave

Unknown said…
I LOVE The Divorce Party. If divorce in the title sounds scary, it shouldn't. the book is about marriage and friendship-- just like the review says. (great review by the way.)
August 27, 2009 at 10:39 AM