August 27, 2009
I want to thank Sarah with St. Martin's Press for sending me a copy of this book to review. 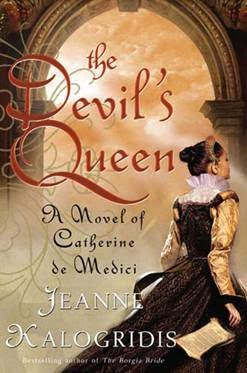 The Devil’s Queen is based on Catherine de Medici. Catherine came from a famous family. Her family was Duke of Urbino and her mother was Countess of Boulogne. At the age of fourteen her parents were killed. Catherine was sent to captivity. Luckily she didn’t have to stay imprisoned for very long, as she was married off to Prince Henry. Henry had more of a fondness for his mistress than he did for Catherine.

Catherine used to dabble in astronomy and some of the dark arts when she was younger. She stopped till now. Catherine became very protective of her sons and she grew stronger, especially when Henry died.

The Devil’s Queen is the first book I have read by Jeanne Kalogridis. Having not been familiar with Catherine de Medici, I did some research to learn more about this woman. I was amazed to learn how much power she possessed. What was even scarier is that in The Devil’s Queen, Catherine was big on astronomy and what some would consider…witch craft. Ms. Kalogridis takes the story of Catherine to a darker level. I almost feel sorry for Catherine as she is abandoned by her husband for his mistress but than again I don’t feel sorry for her. This is because Catherine is so cold and unattached that she is like an ice queen. I thought the idea behind this story was great but I really struggled with this book. As much as I found Catherine’s interests intriguing, she as a person and the rest of the characters were uninteresting. The beginning seemed to drag somewhat as well. The Devil’s Queen may not have won me over this time but I may give Jeanne Kalogridis another try in the future.

Also check out this mini book of Black Magic that St Martin's Press put togther, made especially for The Devil's Queen.
Jeanne Kalogridis

The Bookworm said…
This sounds like it would be an interesting book, too bad it wasnt that great.
http://thebookworm07.blogspot.com/
August 27, 2009 at 2:56 PM